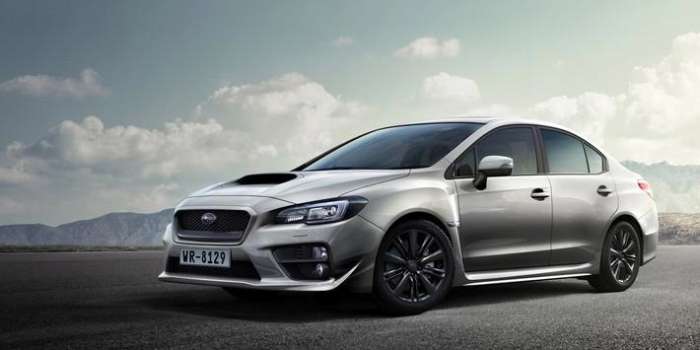 The all-new 2015 Subaru WRX STI is getting ready to be unveiled at NAIAS. Will it be coming with a new 2.0-liter turbocharged powerplant?
Advertisement

Don’t be surprised if the all-new 2015 Subaru WRX STI is unveiled with a new 2.0-liter turbocharged powerplant. Just like the 2015 WRX, Subaru will likely do away with the 2.5-liter turbocharged Boxer engine in the new-generation WRX STI in favor of the smaller and more efficient 2.0-liter turbo engine. This is the same powerplant that powers the 2014 Forester XT but it will come with significant performance modifications.

We expect the all-new 2015 WRX STI to be unveiled at the North American International Auto Show in Detroit on January 13. Just like many automakers, Subaru is downsizing their engines in favor of smaller more efficient powerplants. But the good news is, these smaller engines can produce more horsepower than the larger outgoing mills.

The auto manufactures need to do this to keep up with the new global emission standards. The new engines will be smaller, come with direct injection, will be turbocharged, have higher compression and will also be lighter. The new 2.0-liter 2015 WRX sees additional horsepower (3 hp) but a reduction in size for the 2.5-liter outgoing engine.

The 2015 WRX STI will likely get the same 2.0-liter Forester engine like the WRX, but with extra tweaks and tuning to get the horsepower above the current 305 hp. WRX saw a small bump in hp and even more torque from the smaller engine. WRX STI should see improved hp and more torque. But don’t look for huge increases.

Subaru is going to change the driving dynamics of the WRX STI in direct relation to the engine upgrades. This will be similar to what we see them doing with the new LEVORG sports tourer. Subaru will put its first downsized turbo on sale next spring. LEVORG will feature a new 1.6-liter direct-injection turbo engine that goes on sale in Japan.

That new powerplant subs for a naturally aspirated 2.0-liter engine and the 1.6-liter turbo delivers better fuel economy than the 2.0-liter, and pumps out power equal to that of a 2.5-liter engine. Subaru may be doing this in their other vehicles in the future. Naoto Muto, executive vice president for global engineering told Automotive News, Subaru is studying a possible use in the United States of expanding turbos to sub for bigger engines in the lineup.

Heres’ what we know about the new 2.0-liter engine from the WRX that will be similar in the WRX STI. The engine uses a combination of direct injection, high compression (10.6:1), Subaru Dual Active Valve Control System (D-AVCS), a twin-scroll turbocharger and an intercooler to get improved performance over the Forester version.

Subaru will make even more upgrades to the WRX STI and squeeze out more hp and torque. Mercedes is getting 355 hp from a 2.0-liter turbocharged mill in the CLA45 AMG. The new engine upgrades over the Forester mill will also see different camshafts and higher-rate valve springs. The twin-scroll turbo will develop peak power at a lower turbo psi boost also.

If the new-generation 2015 Subaru WRX STI comes with the 2.0-liter powerplant, it will produce more power, and will have significant improvements in weight reduction and engine placement. The new engine will sit lower in the chassis for better weight distribution and will give the WRX STI improved handling in the corners. It may not get a huge bump in hp, but the total package will deliver improved performance.

JM wrote on December 22, 2013 - 6:08am Permalink
Ummm no, try and keep up better if you are a "journalist" "Set to debut at the Los Angeles Auto Show, the 2015 WRX will have a turbocharged 2.0-liter four-cylinder engine while the WRX STi will have a slightly larger 2.5-liter unit."