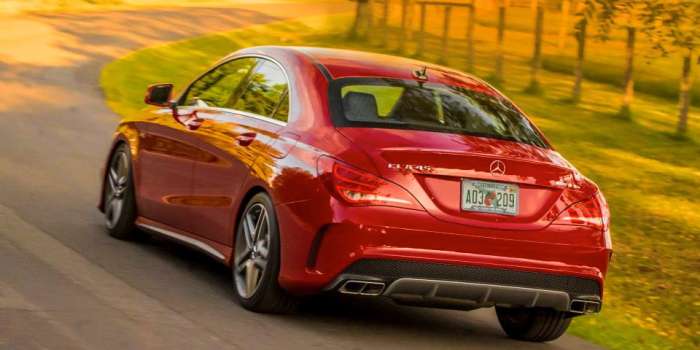 The performance-oriented 2014 Mercedes-Benz CLA45 AMG has started arriving at dealerships nationwide. What makes it a standout performance machine?
Advertisement

Are you looking for a standout performance machine under $50K? How about adding in all-wheel drive and a hand-built AMG 355-hp turbocharged engine? These are some of the things that make the all-new 2014 Mercedes CLA45 AMG a remarkable performance street brawler. If you are a serious performance fan, here are seven reasons to take a look at the new four-door coupe.

The most boost of any production engine

How does the CLA45 AMG’s engine get its incredible power numbers? AMG uses high-pressure turbocharging that not that long ago could only be handled by purpose-built racing mills. Now, the CLA45 AMG production engine gets twenty-six pounds per square inch. Normal atmospheric pressure is 14.7 psi at sea level and your ears feel 19 psi under 10 feet of water. This engine produces a remarkable 26 psi of boost!

It features a dual-clutch transmission

The performance four-door coupe gets its seven-speed dual-clutch transmission from the SLS AMG GT. And it’s capable of lightning-quick gear changes. There is very little time or power wasted between shifts.

CLA45 was developed at the Nurburgring

Racing legend Sir Jackie Stewart called it “the green hell” in a fit of exasperation, because of the combination of trees, turns and sheer speed of the track. Today, the top performance cars in the world are tested at Germany’s Nurburgring. And this is where AMG tuned the CLA45 AMG, on what’s widely considered the most demanding and difficult purpose-built racing circuit in the world.

Every AMG shares the same trait of its signature AMG exhaust note. The CLA45 is no different and gets a distinctive rumble with pops and barks between gear changes that will let anyone within ear shot know that this is a true performance vehicle from AMG. Mercedes has established a new performance segment with the CLA45 AMG.

It comes with standard sport seats that provide enough bolstering for spirited driving on the street, but for those planning on taking their AMG to the track, aggressive sport seats built by Recaro are available. This is the same company that supplies racing seats to motorsports teams around the world, including AMG’s.

Not many of us can afford a $275,000 SLS AMG Black Series, but the $47,450 2014 Mercedes-Benz CLA45 AMG is within the reach of many performance fans around the globe. Mercedes-AMG has produced a standout performance machine under $50K for the true performance fan. It is arriving now at Mercedes showrooms in the U.S.