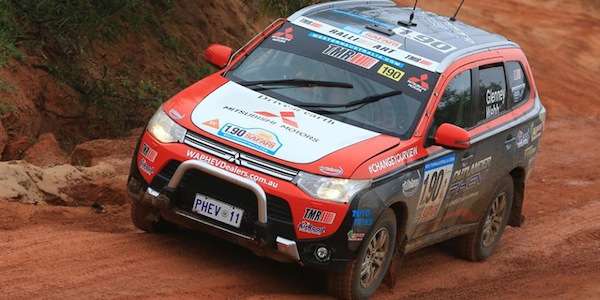 The Mitsubishi Outlander PHEV completed the tough Australasian Safari 2014. MMC will use the technology for future electric vehicles like the Lancer Evolution successor.
Advertisement

Mitsubishi Motors Corporation (MMC) is testing their Outlander PHEV in the most grueling races on the planet for one reason. They will use the the data gathered in the course of these events to use in future electric vehicle development like the Mitsubishi Lancer Evolution successor. Automakers like Mitsubishi and Subaru have used Rally racing to further the technology on their performance cars for decades. MMC has plans for a future performance car and the technology is already here. What happened in Australia?

MMC along with Team Mitsubishi Ralliart Australia (TMR Australia) entered a plug-in hybrid Outlander PHEV in the Australasian Safari 2014 cross-country rally. The grueling race took place in Western Australia from September 19-27. The TMR Australia rally car crossed the finish line after completing the 3,529 km grueling course in a total time of 57 hours 49 minutes 14 seconds to finish in 19th place overall while also winning its class. But the team encountered some challenges.

The Mitsubishi Outlander PHEV encountered two accidents, once on Leg 4 and again on Leg 6 which dropped its ranking. But the race is more about seeing how the Outlander PHEV's all-terrain performance would hold up in Western Australia's deserts. Outlander PHEV uses a Twin Motor 4WD powertrain and MMC’s Super All-Wheel Control integrated vehicle dynamics control system. The team found out that the Plug-in Hybrid EV System is more than capable of withstanding the punishing road conditions encountered during the rally.

The PHEV system is durable under severe conditions

Yoshihiko Ototake, Technical Director for MMC was pleased with the results and said the technology will be used in future production vehicles. He said after the rally race, “In doing so (Outlander PHEV) successfully demonstrated the high reliability and durability of the Mitsubishi Plug-in Hybrid EV System which delivered trouble-free performance. I'm also very satisfied that it proved the capabilities of the Twin Motor 4WD and S-AWC systems which helped it traverse desert-like sandy terrain where many four-wheel drive pickups and SUVs were getting bogged down and stuck. I am looking forward to utilizing the many kinds of data we gathered in the course of the Safari in our future electric vehicle development.”

The main reason Mitsubishi has entered this Australasian Safari 2014 cross-country rally is primarily to collect more valuable data for use in their future electric vehicles. MMC brought a team of engineers who provided technical support for the Two & Four Motor Sports rally team, headed by Kenji Ishida. MMC is being very secretive of the next Mitsubishi Lancer Evolution successor but we know this valuable data collected will be used in the future performance car. Stay tuned to Torque News for the latest Mitsubishi Lancer Evolution successor news.

Other Mitsubishi Lancer Evolution successor stories of interest.
Winning Outlander PHEV technology to be passed on to Lancer EVO successor