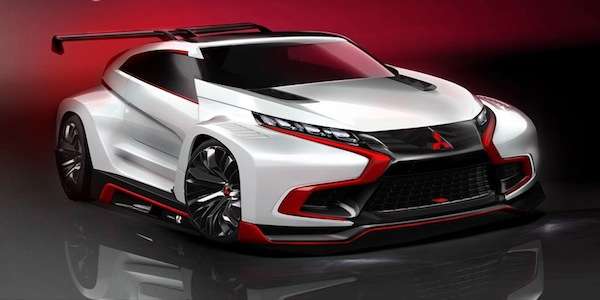 Are Mitsubishi Lancer Evolution fans ready for a PHEV Evolution?

Mitsubishi Motors Corporation created the Concept XR-PHEV Evolution. Could this be the 2015 Lancer Evolution successor?
Advertisement

What’s Mitsubishi up to?

We know that the production models never look like the concept cars, but we can still learn a lot from this concept race car from Mitsubishi. MMC says that this car depicts their history of achievements in races like the Dakar Rally and World Rally Championships(WRC). Does Mitsubishi put all this effort into developing a car for Vision Gran Turismo with no other agenda? Our guess is that MMC is up to more than playing games.

"Vision Gran Turismo" is a project in which the world's leading brands design an original sportscar in commemoration for the 15th anniversary of Gran Turismo, as present to players of "Gran Turismo 6." But Mitsubishi designed this car with all their latest PHEV technology and it includes their new-generation Super-All-Wheel-Control (S-AWC) system for maximum traction to all four wheels. Sounds like the perfect car to take rally racing.

Mitsubishi Motors Corporation (MMC) has been involved in motorsports for 50 years. With racing roots that deep, they aren’t likely to abandon their Rally race program and go away quietly. MMC created a race car model based on a concept car called the XR. The car is powered by a plug-in-hybrid (PHEV) drivetrain with power to all four wheels. It uses an active yaw control system that divides the left and right side torque electronically for better control on the track and dirt. This would ideal for the next-generation Lancer Evolution.

XR developed for the track and dirt

The Mitsubishi Concept XR-PHEV Evolution is very aerodynamic and Mitsubishi engineers were focused on gaining downforce without increasing wind resistance when they developed this car. MMC says the XR -PHEV Evolution is based on “an athlete form.” Engineers developed the race car to have power that would “come from a crouching start position.” The engineers said, “everything is designed to drive faster, making fine adjustments to angles and heights.” This sounds like it would be a great Global Rallycross race car.

Watch this unveil video as the XR-PHEV Evolution attacks the race course.

Thy wrote on July 7, 2014 - 1:56pm Permalink
Assuming I don't have to spend 60K USD on a new Evo, then sure, I might trade in my tuned 2012 for something new. The Evo community is owned by people who like to tune and improve their cars, so I want to see if Mitsu continues to support the tuner community by designing the platform to be easy for aftermarket upgrades. Heck, Mitsu even developed their own aftermarket turbo that pushes a standard Evo X with supporting mods to 400+ HP. In the current Evo X, I've seen guys strip out / upgrade nearly every part of the car to improve their standings at the race track. I've seen some owners even struggle to unlock the secrets of the TCU so that they can reprogram the twin clutch to handle 650 + HP. Now that's a dedicated community... Will a future, greener Mitsubishi continue to support fanatic fans by giving them a platform they can improve on? I guess we will have to see.