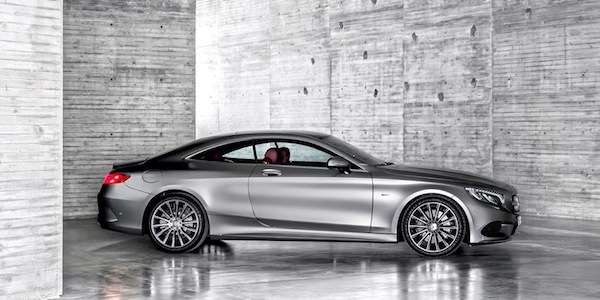 The focal point of the Mercedes-Benz presence at the 84th Geneva Motor Show is the 2015 S-Class Coupe. It's easy to see why it was a big hit at the show.
Advertisement

Mercedes-Benz brings the all-new 2015 S-Class Coupe to the 84th Geneva Motor Show and it’s a big hit. The S-Class Coupe sits at the top of the lineup for the German automaker and the car is stunning to say the least. Mercedes chose the Geneva Motor Show to reveal the new S-Class Coupe because Auto shows “go from classy, to classier, to Geneva.” Attendees at the show were treated to the global debut of the new high-end luxury coupe and it stole the show.

Mercedes-Benz also brought the new V-Class family hauler for its world premiere, but it isn’t much of a contest between the flagship S-Class luxury coupe and a minivan for excitement. In the video below, Mercedes-Benz Reporter Yasmine Blair tries to get us excited about the new Mercedes V-Class, but it’s a stretch to get anyone pumped about a grocery-hauler.

The new S-Class Coupe with its floating dashboard and beautiful exterior design stands at the top of the Mercedes-Benz range. “The new S-Class Coupe stands at the very pinnacle of our product portfolio and is a further milestone in our luxury-class offensive with a total of six models in future instead of three,” says Dr. Dieter Zetsche, Chairman of the Board of Management of Daimler AG and Head of Mercedes-Benz Cars. “This car drives as good as it looks – and that’s no mean feat, because we’re talking here about the most beautiful S-Class of all time.”

It’s hard to argue that the S-Class Coupe is the most beautiful car at the Geneva Motor Show. The new coupe features classic sports car proportions on the outside with modern luxury and state-of-the-art technology inside. The new Mercedes coupe comes with the world’s first series-production car to be equipped with the Magic Body Control chassis system with curve tilting function.

This unique feature allows the S-Class Coupe to lean into a curve in a similar manner to “a motorcycle rider, reducing the lateral acceleration acting on the occupants,” says Prof. Thomas Weber, Member of the Board of Management of Daimler AG responsible for Group Research and Mercedes-Benz Cars Development. “On country roads in particular, this means more driving fun and comfort for our customers.”

The new 2015 Mercedes-Benz S-Class Coupe comes powered by a V8 biturbo engine. In the S 500 Coupe, the powerful V8 generates 335 kW (455 hp) and a maximum torque of 700 Nm. This new luxury coupe not only looks good, but will be fast and appeal to performance enthusiasts. It’s easy to see why Geneva Motor Show attendees chose the S-Class Coupe over the V-Class as the shows most popular new Mercedes-Benz vehicle.

Watch Mercedes-Benz Reporter Yasmine Blair as she takes you to the Geneva Motor Show for a first look at the 2015 Mercedes S-Class Coupe.