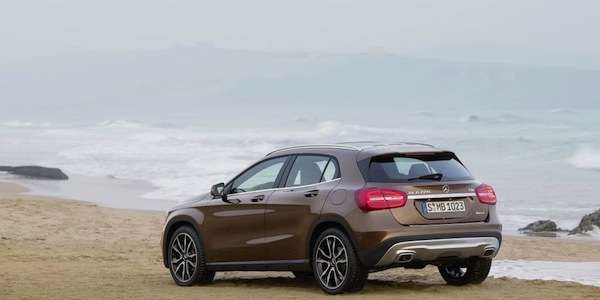 The 2015 Mercedes-Benz GLA-Class hasn’t even launched yet and it’s already getting awards. What did readers of German "auto motor und sport" magazine say?
Advertisement

Mercedes-Benz has won a double victory in the poll for the most beautiful car of the year 2014. Both the 2015 GLA-Class luxury compact SUV and the S-Class Coupe were unequivocally rated the most beautiful cars in the world. They received these awards in their segments by the readers of German "auto motor und sport" magazine.

When it comes to beautiful automobiles, Mercedes has been building them for over 100 years. And beauty is the only thing that counts in the poll for the autonis Design Award, which "auto motor und sport" magazine conducts each year to crown the most beautiful cars on the planet. In the luxury segment the 2015 Mercedes-Benz S-Class Coupe won the coveted honor by a wide margin. Among the compact cross-country vehicles, the 2015 Mercedes-Benz GLA -Class was by far the most popular with the German magazine’s readers.

The 2015 GLA-Class reinterprets the compact SUV segment with its progressive design and flowing lines. A new generation of buyers is already being drawn to its youthful appearance that is creating excitement around the globe. It’s the ideal multi-use vehicle for getting an active generation away from the everyday routine. The S-Class Coupe won over the readers with its aesthetic design, exclusive appointments and sophisticated sportiness.

In Europe, buyers can order their "custom" GLA-Class now. Mercedes is attracting a new generation of millennial buyers to the brand with their fourth new premium compact and these buyers want the ability to choose different options. They can choose between three model lines comprising "Style", "Urban" and "AMG Line." It will also come in unique packages such as "Night" and "Exclusive" and also further optional extras. Each buyer can certainly make their SUV special.

GLA-Class appeals to a new generation

The new luxury compact SUV gets a progressive design that will allow new Mercedes buyers to use it for daily commuting during the week, and use it for recreation on the weekends. It’s small and compact enough for city commutes and robust enough with 4MATIC all-wheel-drive for off-road adventures. Young millennials will be drawn to the new compact SUV who lead active lifestyles.

Mercedes-Benz has received a double victory in the poll for the most beautiful car of the year 2014. Both the 2015 GLA-Class luxury compact SUV and the S-Class Coupe were unequivocally rated the most beautiful cars on the planet. The luxury compact 2015 GLA-Class is already a big hit with younger buyers in Germany. Look for the first all-new 2015 Mercedes-Benz GLA-Class compact luxury SUVs to arrive in U.S. showrooms in September.