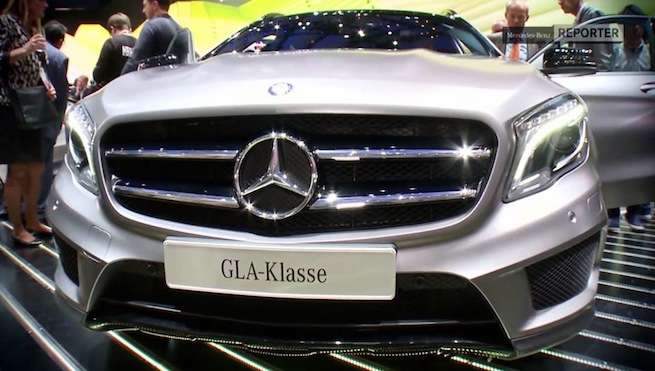 The new 2015 Mercedes-Benz GLA-Class made its world premiere at the 2013 IAA in Frankfurt and is attracting much attention already.
Advertisement

The new 2015 Mercedes-Benz GLA-Class made its global premier this week and gets two new features that will be sure to excite new buyers when it arrives. Frankfurt IAA 2013 is the show where automakers show off their new stuff to the world and Mercedes-Benz had two world premiers this year. They brought the new 2015 GLA-Class premium compact SUV and the new S63 AMG. Both were turning heads and attracting much attention.

The GLA-Class is a new premium compact SUV that will help define the future for the brand. Along with the new CLA-Class that launches today in the U.S., they will help Mercedes create a new global emphasis on attracting younger buyers to the brand. The two will likely succeed in a big way and the GLA-Class has two things that will attract a new generation to the brand.

The 2015 GLA will come with all the new high-tech features a new generation is looking for. It will come with the brand’s acclaimed connectivity service mbrace2, providing users with an extensive range of online and concierge services and apps all linking seamlessly to smartphones for use inside and outside the vehicle. It uses the latest cloud technology and offers users wide-ranging and flexible access to content.

It uses Siri voice control and will fully integrate with the iPhone. Real time location sharing allows the driver to share their location with anyone they choose. It will also use a Bluetooth profile that allows wireless integration between the iPhone and the GLA.

The 2015 GLA-Class will be the first Mercedes to be available with the new-generation all-wheel-drive 4MATIC with fully variable torque distribution. The new system features a power take-off to the rear axle that is integrated into the seven-speed dual clutch automatic transmission, and the rear-axle gear with integrated, electrohydraulically controlled multi-disc clutch. The new-generation 4MATIC has a lower weight and also allows fully variable distribution of the drive torque between front and rear axles.

The GLA-Class will appeal to young active buyers who will use the premium compact SUV for recreational enjoyment. Most buyers don’t need an SUV that can climb a rock face like a Range Rover. Most will use the GLA for daily urban commutes during the week and for watersports and mountain activities on the weekend. It looks like Mercedes has hit on the right formula with the new GLA and CLA compact premium vehicles.

Look for the all-new 2015 Mercedes-Benz GLA-Class to be a big hit with a new generation of consumers around the globe. It will arrive in U.S. showrooms fall of 2014 full of the latest technology. The all-wheel-drive 4MATIC GLA will be available in the U.S. in early 2015.

Stay tuned to Torque News for the latest GLA-Class news.