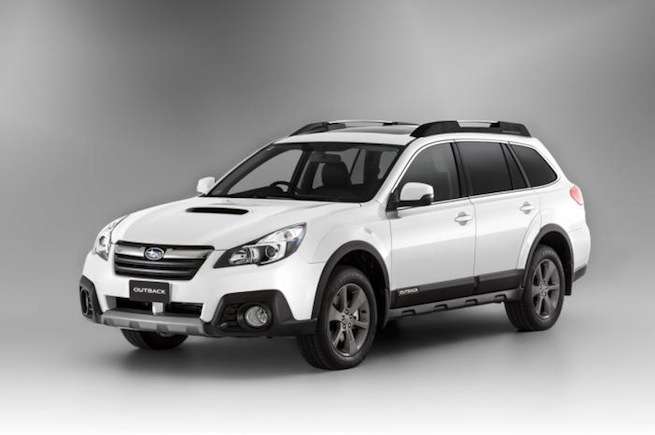 Subaru has released details on the new 2014 Outback and it will adding new aggressive styling cues.
Advertisement

Subaru is updating the new 2014 Outback with new exterior styling cues that gives it a tougher look to go along with a more rugged all-wheel-drive. The Outback has been regarded by many as the original crossover wagon when it launched in 1996, and it remains a favorite in the recreational segment. Subaru Australia has released new details on the 2014 model and it gets new aggressive styling updates.

It reminds us of the new XV Crosstrek that has body cladding and a more rugged appearance. The new 2014 Outback will feature a number of new muscular upgrades that includes, roof rails with integrated cross bars, side sills and cladding, wheel arch guards, front and rear under body guard protectors, front mud flaps, dark grey front grille, dark grey alloy wheels and new sporty headlights with a black background.

Once customers saw the new 2013 XV Crosstrek that was launched last year, they wanted similar styling cues for the Outback. Subaru Australia Managing Director, Nick Senior, said, “We’ve had a lot of customer feedback suggesting owners would like a slightly tougher-looking Outback with greater body protection, which is especially useful on rural roads where this wagon rates highly.”

The new styling shows Subaru’s commitment to listen to customers and keep the brands vehicles fresh. Subaru calls this their “All 4 the Driver customer promise.” In addition to the exterior changes, Subaru also updated the mechanical components. For 2014 , all Outback 2.5i variants added the new, more fuel-efficient and environmentally-friendly FB horizontally-opposed Boxer engine. They also revised the Outback’s all-wheel drive system with improved precision in torque distribution between front and back wheels, refining handling and stability.

The new 2014 Subaru Outback gets a new tougher-looking exterior and its off-road credentials are also improved. The new 2014 model launches first in Australia and can be expected soon in other markets around the globe. The 2014 Outback gets even better for recreation enthusiasts.