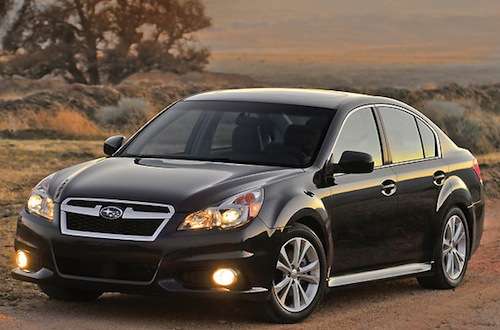 Subaru has held the line on pricing of the new 2014 Legacy and 2014 Outback models keeping the same MSRP as 2013 models.
Advertisement

Subaru of America has announced pricing for the new 2014 Subaru Legacy and 2014 Outback, and most models will have no increase in pricing over the 2013 models. The 2014 Legacy all-wheel-drive sedan 2.5i starts at $20,295 and the 2014 Outback Sport Utility Wagon starts at $23,495. All prices reflect MSRP before the $795 destination charge for Legacy models and $825 for Outback models. The new pricing keeps the new 2014 Legacy as the most affordable midsize all-wheel drive sedan in America. How is Subaru able to keep the same pricing on the new models?

Subaru has posted record sales in the U.S. and around the globe the past five years. This gives the brand a competitive advantage as they can offer the popular vehicles with little or no price increase. Subaru is attracting new buyers to the brand who have never purchased a Subaru vehicle before. The 2013 Legacy received a refresh with new front styling with new headlights, grille and front bumper. The new Legacy remains basically the same for the 2014 model year. What keeps the Legacy and Outback models competitive?

All-wheel drive is not just an option

Most automakers charge extra for their all-wheel-drive models while the 2014 Legacy and Outback models come standard with Symmetrical All-Wheel Drive. And they are priced similarly to competitors that either do not offer all-wheel drive or make it an extra-cost option. This gives the brand an advantage over other automakers as more buyers see the benefit of having all-wheel-drive both in wet and dry conditions. And as fuel prices rise, both the 2014 Legacy and Outback feature excellent fuel-economy.

The 2014 Legacy 2.5i and Outback 2.5i models are both powered by a 173-horsepower 2.5-liter four-cylinder BOXER engine that was new for 2013 and helped increase fuel economy. The Legacy 2.5i Premium and Limited and Outback 2.5i Limited come standard with the new CVT automatic transmission that is specifically designed to increase fuel mileage. The 2014 Legacy remains the most fuel-efficient midsize all-wheel drive sedan in America. The 2.5i with CVT gets an estimated 24/32 city/highway mpg.

Subaru sells more vehicles in cold climates and in response to those trends, the Japanese automaker has upgraded the 2014 Legacy 2.5i Premium and Outback 2.5i Premium models to include as standard the All-Weather Package (heated front seats, heated side mirrors and windshield wiper de-icer). Subaru listens to their customers through surveys and responds to what they are asking for.

The Premium Legacy and Outback models also now come standard with the display audio system featuring a 4.3-inch screen, six speakers and SiriusXM Satellite Radio with a 4-month free trial subscription. The display is compatible with the available rear camera system. The Premium models get a $300 price rise over comparably equipped 2013 versions.

Legacy and Outback are extremely safe

With Subaru holding the line on pricing for the new 2014 Legacy all-wheel-drive sedan and 2014 Outback Sport Utility Wagon, they have too much going for them not to remain top sellers in the Subaru line. They feature standard all-wheel-drive, great fuel mileage, more standard features and they are they safest vehicles on the road. That’s a pretty good formula for success.