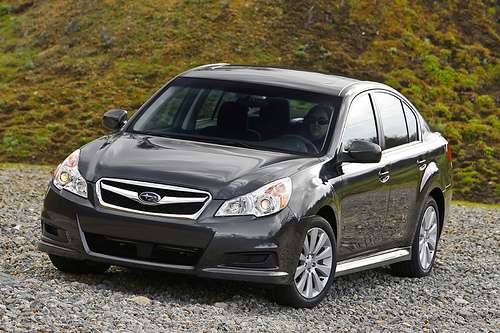 Study shows Subaru Legacy is the safest sedan you can buy

Consumers who are looking for a safe sedan don’t have to look any further than the new 2013 Subaru Legacy. See what top rank the sedan has received.
Advertisement

In fact, the Subaru brand are the safest cars on the planet and has received IIHS Top Safety Pick awards for every model it builds. In Japan, the stringent tests are conducted by the Ministry of Land, Infrastructure, Transport and Tourism (MLIT) and the National Agency for Automotive Safety and Victim’s Aid (NASVA). The Subaru Impreza has also won the 2012 "Five Star Award" for safety in Japan. What does Subaru do to make the Legacy safe?

Safety has been a priority at Subaru

Safety is not new for the Japanese automaker, as they have been testing their cars since the 1960’s before safety testing methods had yet to be established. The whole Subaru lineup along with the new Legacy has won high praise around the globe for their safety record. The Legacy also received the prestigious five star rating from Euro NCAP in 2009 for the Subaru Legacy.

Safety targets were set before the Legacy was designed

The high safety targets are designed into their vehicles before they ever reach production. The safety targets are set first, and then the design team uses computers to conduct impact simulations. Those results are then incorporated into the new design. Real-world impact simulations are then conducted in Subaru’s own test facility. Hundreds of new Legacy test mules were smashed before the sedan ever reached production. And Subaru even goes beyond what is expected from the various national safety tests around the world.

Many automakers have a slogan that they are known by, and Subaru’s brand statement "Confidence in Motion" lets their customers know that they can rely on the brand to build safe cars. Fuji Heavy Industries Ltd, (FHI) is committed to offering its customers Subaru’s distinctive "Enjoyment and Peace of Mind" driving experience. Subaru says they will continue to enhance its active, passive and pre-crash safety technologies under the Subaru "All-Around Safety" principle “as the foundation of enjoyable, heartsease driving for drivers and passengers.”

Watch the 4th-generation Forester safety development to see how Subaru designs safety into their cars.