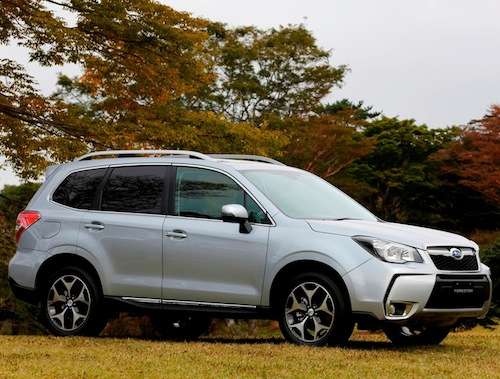 The all-new 2014 Subaru Forester is taken on a 60,000 mile treck across five continents and it starts in Australia where it tames the most adventurous terrain.
Advertisement

Subaru wanted to test the all-new 2014 Subaru Forester, so they took it on a one year treck over 5 continents and 60,000 miles. They started in Southern Australia where there is some of the most rugged terrain and beautiful scenery on the planet. Driver Morio Fukui and team leader Koya Nitta took the new crossover to prove its all-round performance, from everything from narrow dirt roads to sand dunes in Southern Australia. The pair is filmed as they take the new SUV over the year long journey.

The journey starts in the Australian Finders Range

The first video takes the team into the Australian Finders Range where they test the Forester’s Symmetrical all-wheel-drive and X-Mode. They take the new SUV up a narrow rocky path with a 52 percent grade to prove the performance of the X-Mode. As they ascend the rocky ridge, they switch on X-Mode and it makes a big difference in climbing the steep grade.

The X-Mode is a new feature on the 2014 Forester. It's designed to be used in extreme off-road use and further enhances the rough road drivability. Many Subaru buyers are looking for outdoor adventures and live in mountainous regions of Colorado, Oregon and the Northeast where they will take the vehicle camping, hiking, mountain biking, skiing and back-country fishing. This is where they will encounter the same terrain as the team experienced in Southern Australia. The new Forester will run with confidence through some difficult and extreme terrain. As the tires begin to slip on the rocky slopes. the X-Mode enabled the Forester to climb the mountain roads with ease. By integrating the engine and transmission control with AWD and VDC, adequate control is maintained to all four wheels and the vehicle achieved a smooth escape.

The second video takes the Forester to the great ocean road in Victoria Australia. Fukui and Nitta drive along the windy coastal road and test the crossovers Symmetrical AWD and CVT transmission. Their new Forester was equipped with the new 2.0-liter direct-injection turbocharged Boxer engine producing 250 horsepower and 258 lb ft of torque. It comes with a new intercooler for increased performance. The Forester takes the twisty turns along the coast and keeps all four wheels firmly planted on the road.

Tasmania in the southeast of Australia

The third video takes the team to Tasmania is in the southeast of the Australian mainland. It is a treasure house of nature, with one-third of the island designated as a national park or a World Heritage Site. On the ever-changing course of grasslands, gravel roads and rain forests, the Forester's overall performance is put to the test. The team takes the vehicle through dirt roads dotted with large mud puddles and narrow steep forested roads. At one point they get stuck on a sand dune and when the X-Mode was switched on, it went ride up the sandy dune.

The next test will take the 2014 Subaru Forester to the continent of Europe and the freezing fields of Norway. Stay tuned for more adventure.

mopartodd wrote on February 8, 2013 - 11:35am Permalink
Nice write-up. I'm really looking forward to driving the new XT. It looks to be a well-rounded package. Looks like the intercooler is fed cool air through some sort of scoop, I'm assuming runs from the grill area. Any ideas?
P.J wrote on March 19, 2013 - 1:40pm Permalink
This reviews and the videos are the best info on the Forester 2014 on the web atm. I'm looking to change my '06 WRX that served me so well over the past 7 years. I have been focusing on the Forester for a while but couldn't go with what was actually offer. I never that the new model would be such an enhancement over the last one and I really look forward to test soon. I've got some questions for you guys that you might be able to answer since I am unable to find anything on it, and nobody seems to care either for these difference: 1) I live in Canada, could you tell me why the XT version has only 250 hp here instead of the 296 like the one in Japan? What makes up that huge difference on the same 2.0l engine? 2) I've noticed that there are tiny LEDs next to the the fog lights. Is this standard on all XT of is this a special feature of that particular Forester in your review? They are really nice and add a very good looking touch. Regards, P.J from Canada