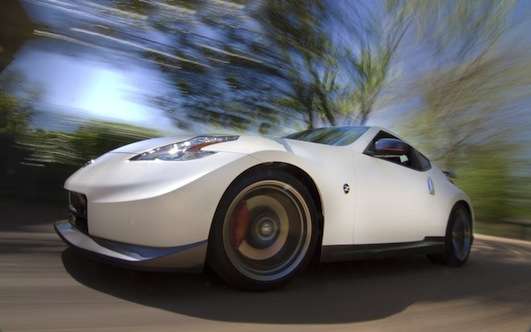 Nissan has announced a reduction in price for the new 2014 370Z Coupe and 370Z NISMO gets new interior and exterior enhancements.
Advertisement

Prices rarely drop on new cars, but Nissan is keeping the 2014 370Z Coupe competitive by slashing the price. The new 2014 Nissan 370Z Coupe, NISMO and Roadster are available now at Nissan showrooms in the U.S. Nissan has released pricing on their two-door sports car and the Coupe gets a drastic price reduction of $3,130 USD and $2,550 USD for the 370Z Coupe Touring grade. And pricing on the 2014 Nissan 370Z NISMO and 370Z Roadster remain unchanged.

This should help Nissan as they try to keep the new 370Z Coupe competitive in the growing U.S. sports car marketplace. The new Coupe equipped with manual transmission now comes in under $30K at $29,990 USD. When equipped with the seven-speed automatic it starts at $31,290.

The 2014 Coupe Touring manual transmission starts at $35,270 and Touring automatic $36,570. Destination and Handling adds $790 to all models. There are no significant product enhancements for 2014 for the Coupe. Nissan is looking at the introduction of the all-new global 2015 Ford Mustang and know they have to remain competitive in price. The new pony car could be a big reason why Nissan has announced a price drop for the 2014 370Z Coupe. The new Mustang will get significant improvements and will be a global contender in the sports car marketplace.

Nissan is growing the NISMO brand and will need the 2014 370Z NISMO to keep up.

The hot new 2014 Nissan 370Z NISMO price stays at 2013 model year levels at $43,020. The new 370Z NISMO is powered by a modified 350-hp 3.7-liter V6 engine, and features a bespoke chassis tuned to deliver a sharper and even more engaging driving experience. The hottest Z in the world is capable of accelerating from 0-100kp/h in just 5.2 seconds.

The V6 is mated to a close-ratio six-speed manual transmission, gets sport-tuned brakes and 19-inch forged aluminum-alloy wheels. The 2014 370Z NISMO has been revised and gets distinctive new exterior and interior accents. Enhancements include new dark gray coloring for the front and rear fascias, lower side sills, side mirrors and NISMO rear spoiler. The treatments also include NISMO-style red pinstripe accents. Inside, NISMO features a new steering wheel with Alcantara appointments and red accents and a red NISMO tachometer.

The new 2014 Nissan 370Z Coupe, NISMO and Roadster are priced to be competitive and are on sale now at Nissan showrooms in the U.S. We’ll see how they can compete in the growing sports car segment.