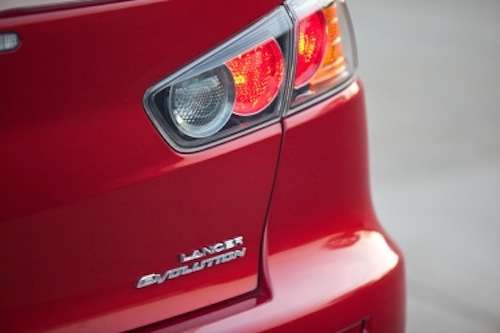 2014 Mitsubishi Lancer Evolution is a high-performance sports sedan that is ready to take to the track and gets new upgrades.
Advertisement

All this gets added to the already potent 2.0-liter turbocharged and intercooled inline-4-cylinder engine that pumps out 291 bhp and 300 lb.-ft. of torque. The Lancer Evolution is no stranger high-performance and to winning on the track. Its won four straight championships from 1996 through 1999 with Finnish racing legend Tommi Makinen on- and off-road featured in the challenging World Rally Championship (WRC).

As most automakers use the race track as a testing ground, Mitsubishi has developed their Super All-Wheel Control (S-AWC) all-wheel drive system and the information they gather translates to the production model and is available for the production models GSR and MR.

The competition-based tuned suspension on the Evolution uses inverted MacPherson struts at the front with a multi-link design at the rear. It gets aluminum control arms, and aluminum is used extensively throughout the vehicle to help reduce overall vehicle weight in the front fenders, hood, roof and front and rear bumper beams.

The 2014 Mitsubishi Lancer Evolution MR gets a very special transmission that is “nothing short of an engineering masterpiece.” It uses Mitsubishi Motors’ Twin-Clutch Sportronic Shift Transmission (TC-SST). The six-speed gearbox produces quick split-second shifts and can be operated in “automatic” mode or “manually” shifted by the driver via the steering wheel-mounted paddle shifters. It can also be shifted by pushing forward/pulling back on the console-mounted gear shift lever. The 2014 Lancer Evolution MR starts at $38,195.00,

Whether buyers chose the 2014 Mitsubishi Lancer Evolution GSR or MR, they will get a high-performance sedan that will light up the road or track. The new upgrades make it a more enjoyable fast ride.