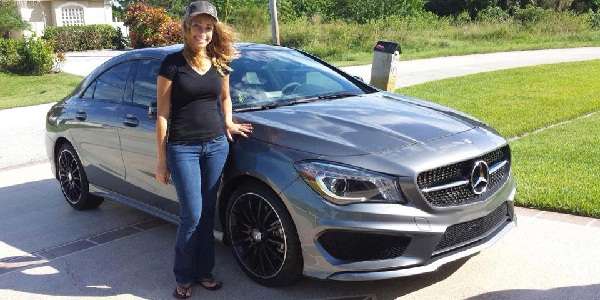 The all-new 2014 Mercedes CLA-Class is selling so well that there is a shortage of cars. Is this discouraging new buyers?
Advertisement

Mercedes-Benz has hit a home run with the all-new 2014 CLA-Class four door coupe. It’s been so successful that the German automaker is running out of the new four-door coupe. The new CLA-Class is selling so well that Mercedes-Benz had to notify its U.S. dealers to expect fewer deliveries of the new coupe in the first half of 2014. The all-new 2014 CLA launch is successful beyond what dealers had expected. Is this going to discourage new buyers if they have to wait?

Daimler AG sent a letter to its Mercedes dealers saying it anticipates “tight inventories and low days supply” from February through June because of the car’s “overwhelming success” worldwide. The letter went on to say, CLA production at the two plants in Rastatt, Germany, and Kecskemét, Hungary are running at full capacity, and output should support demand by July.

Mercedes is attracting new buyers to the brand like never before and they seem top be happy with their new CLA. They like the price ($29,900 before destination) its coupe-like styling and high-tech features that make it appealing. But will the short supply of the new Mercedes premium compact deter potential new buyers?

Mercedes says that they have a commitment to put their customers first with every decision they make. In the recent past, Mercedes-Benz has one of the worst customer service ratings of all the luxury brands. Mercedes ranked ninth of 11 luxury brands in the 2013 J.D. Power and Associates Customer Service Index Study, which measures satisfaction with dealership service operations. For a premium brand that has a goal to be the number one luxury brand in the world, that’s unacceptable.

Now Mercedes dealers will have to tell new customers who have never purchased a Mercedes-Benz vehicle before, that they don’t have any CLAs to sell them. This could be a problem for the next six month’s for the German automaker as they ramp up production and fill the pipeline with the new car. They’ve done a great job of designing and marketing the new car, but now can’t deliver any.

Mercedes could potentially lose those customers and now alienate a new generation of buyers that they are trying so hard to attract. The CLA has been the most successful launch in 20 years for the brand. Mercedes had a great idea with the new CLA-Class as the automaker wanted to establish a new segment for the brand to appeal to a younger demographic. But it’s working better than they expected.

Now Mercedes needs to come with a better plan to keep those new buyers happy that want a new CLA but can’t get one. This could potentially do more harm than good if their dealers don’t find a way to put these new customers first. What decisions will Mercedes make now? They won’t be able to switch these new buyers to a more expensive model. We’ll find out next month as Mercedes-Benz dealers begin to run out of the popular 2014 CLA-Class.

We would like to hear from CLA-Class buyers about your experience.

Robert Enos wrote on January 4, 2014 - 6:08pm Permalink
I bought my 2014 CLA 250 one week ago today from a MB dealer in Connecticut. This is the first Mercedes I've ever purchased, but I had specific requests for my vehicle (color, options etc). The dealer didn't have what I wanted, but they scoured dealers up and down the northeast until they found my exact car at a dealer in New Hampshire. The service was great, and I only had to wait 3 days. It sure beat the alternative. Custom ordering a car, then waiting until "late April" for delivery.
Victor gonzalez wrote on January 5, 2014 - 8:43am Permalink
I just bought my 2014 CLA 250 from a dealer jacksonville,Fl and they did not have the exact vehicle I wanted. They said expected time frame would be about 3 months. I end up buying one they had without some of the option I was looking for. However, their level of service was top notch and made you feel like you was buying a the S class.
Armen Hareyan wrote on January 5, 2014 - 8:28pm Permalink
Congrats on your new cars Robert and Victor.