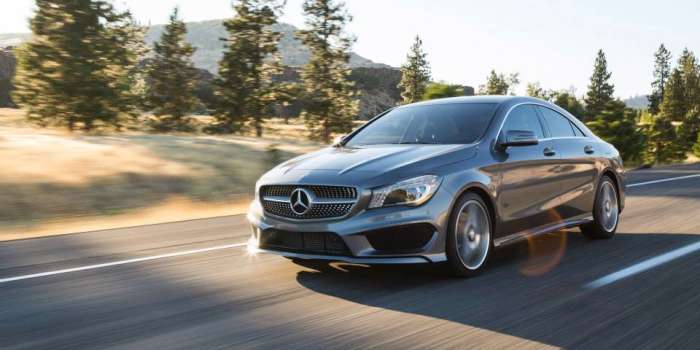 2014 Mercedes CLA blows away BMW and its own dealers

Mercedes-Benz can’t keep up the demand for the new 2014 CLA-Class as sales have helped Mercedes blow past BMW. But Mercedes dealers are also blown away.
Advertisement

The all-new 2014 Mercedes-Benz CLA-Class is selling well beyond expectations and helped Mercedes blow past rival BMW. But Mercedes dealers are also blown away by the new four-door coupe. The new CLA-Class is selling so well that Mercedes-Benz had to notify its U.S. dealers to expect fewer deliveries of the new four door coupe in the first half of 2014. The all-new 2014 CLA launch is successful beyond what dealers had expected.

It’s a great problem for Mercedes to have as the CLA has helped Mercedes overtake rival BMW for the luxury-sales lead in the U.S. market. In a story from Bloomberg, Daimler AG sent a letter to its Mercedes dealers saying it anticipates “tight inventories and low days supply” from February through June because of the car’s “overwhelming success” worldwide. The letter went on to say, CLA production at the two plants in Rastatt, Germany, and Kecskemét, Hungary are running at full capacity, and output should support demand by July.

That’s exactly what Mercedes was hoping for when they designed the new luxury compact four-door coupe. “This is our best launch in 20 years,” Steve Cannon, head of Mercedes’s U.S. sales, said yesterday in an e-mailed statement. “The CLA has been a phenomenal success right out of the gate.”

Plants are humming along at full speed as new younger customers are purchasing the newly-designed compact luxury car. The new compacts are having excellent customer response, and attracting a yonger buyer to Mercedes-Benz. According to the letter to Mercedes dealers, the median age is 46, compared with 54 for C-Class buyers and 57 for the brand, Mercedes said.

Donna Boland, a Mercedes spokeswoman, confirmed, “Our dealers say that they’re seeing a lot more floor traffic and many new faces” because of the CLA, Cannon said. “The increase in our overall model sales indicates that this traffic is benefiting all Mercedes-Benz models.”

Mercedes-Benz could not have planned the CLA-Class any better. The German automaker wanted to establish a new segment for the brand to appeal to a younger demographic. It’s working better than they expected. CLA brings styling that features world-leading aerodynamics, and different design packages and equipment lines for personalization. Younger buyers are responding in a big way.

If you want a new 2014 Mercedes-Benz CLA-Class, you might have to wait in line until production can support demand next summer.