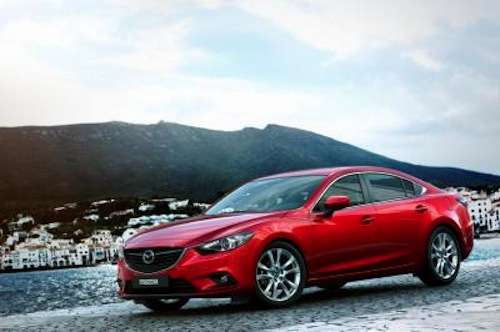 2014 Mazda6 has finally been revealed in Moscow

The all-new 2014 Mazda Mazda6 has finally been revealed and makes its global debut in Russia.
Advertisement

The long awaited 2014 Mazda Mazda6 has finally made its global debut in Moscow. Mazda has announced that the first redesigned mid-size sedan will be showcased in Russia and will get specific specifications for that market. The 2014 Mazda6 will also launch in Europe this year with the vehicle expected to go on sale in North America sometime in early 2013.

The long-awaited arrival of the 2014 Mazda6 begins with the Russian-specification model that includes a SkyActiv-G 2.0-liter gasoline engine that produces 134 horsepower and 155 lb-ft of torque. The engine can be coupled with either the SkyActiv-MT six-speed manual transmission or a six-speed automatic transmission. Mazda has not released fuel-mileage numbers for the redesigned mid-size sedan.

A 2.5-liter gasoline engine also will be available in the Russian market and offers a more powerful powerplant producing 189 horsepower and 189 lb-ft of torque. The larger 2.5-liter engine will be available with the SkyActiv-Drive transmission.  The new Mazda6 will feature 19-inch, five-double-spoke alloy wheels, an ultra-high tensile steel frame, and a new front strut and rear multi-link suspension system. The new-generation Mazda6 will be much lighter, and Mazda says more agile than the previous generation model.

Other new technologies will include the debut of the "i-ELOOP," the Mazda-engineered, world's-first capacitor-based regenerative braking system. Mazda says the new system will improve fuel economy by up to 10 percent in typical city driving situations. Another new feature on the new Mazda6 is the "i-stop" idling stop system that Mazda says will restart the engine in a class-leading 0.35 seconds.  Also, a single-nanotechnology in the catalyst improves the exhaust gas after-treatment process and reduces the amount of precious metal required in the manufacturing process.

Also Russian specific for the redesigned sedan and offered for the first time in a Mazda production vehicle, will be LED headlights paired with halo ring light guides. With the available Adaptive Front-lighting System (AFS), the headlights will track the vehicles movements around curves on the road for added safety at night. The 2014 Mazda6 will come with the most safety features on any car the Japanese automaker has ever produced.

Inside, the 2014 Mazda6 features an all-new luxurious cockpit with a new instrument panel in two new metallic finishes; Bordeaux and Dark. Mazda says they used extensive soft-touch materials throughout the driver oriented cabin.

Final specifications for other global markets, including the U.S. and Canada, will be disclosed in the near future. We'll see if the all-new 2014 Mazda6 will be a global game-changer that Mazda hopes it will be.