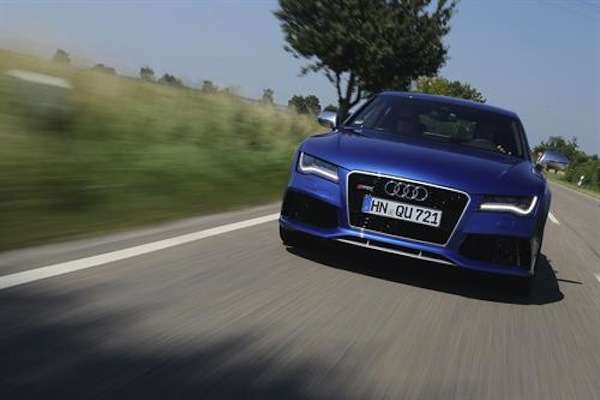 Audi has announced pricing on the all-new 2014 RS 7 and it won’t come cheap to drive the ultimate performance sedan.
Advertisement

There is a price to pay for high-performance, and Audi has just announced the most powerful RS model offered in the U.S. won’t come cheap. Pricing for the all-new high-performance 2014 Audi RS 7 will start at $104,900 USD. The highly-anticipated RS 7 five-door coupe expands the A7 lineup which is enhanced for the 2014 model year with the addition of the all-new fuel-efficient A7 TDI clean diesel model, the A7 3.0T and S7 4.0T variants.

Audi brings the RS 7 to the lineup with more power than ever. The Audi RS 7 is fitted with a twin-turbo 4.0-liter V8 engine, producing an astounding 560 hp and 516 lb-ft of torque. The five-door coupe will launch from 0-60 mph in just 3.7 seconds.

The RS 7 has a top track speed of 155 mph, but Audi says it’s electronically limited here in the U.S. If that isn’t enough power, Audi will offer a Dynamic or Dynamic Plus package that raises the ceiling to 174 and 190 mph, respectively if you can find a track long enough here in the U.S.

All that power will be transferred to the wheels via an RS-tuned eight-speed Tiptronic automatic transmission. The RS 7 features the Audi quattro all-wheel drive system with sport differential for superior grip and handling in the corners in wet or dry conditions.

The new RS 7 will use an advanced cylinder on demand technology that deactivates cylinders 2, 3, 5 and 8 by closing their valves via electromechanical actuators. The 4.0 V8 provides up to 15% better fuel efficiency by running in four-cylinder mode. Active engine mounts smooth out any vibration between eight and four-cylinder mode changes.

Outside the new RS 7 features an adaptive rear spoiler, lower rear diffuser and two large elliptical exhaust tailpipes signifying the exemplary performance that the RS 7 has to offer. It also gets distinctive bumpers and Audi Singleframe grille in aluminum matte or or high-gloss black finish.

The 2014 RS 7 will feature the latest technology Audi has to offer including Audi MMI touch with handwriting recognition. A revolutionary touchpad interprets hand-written inputs from the driver for commonly-used controls. The driver can perform a number of functions like write the digits of telephone number and the letters of the navigation destination with a finger, or scroll over maps. Audi says it can all be done without the driver taking their eyes off the road. With all this speed, they better be right.

American performance fans won’t get left out this time as Audi will bring the hot 2014 RS 7 ultimate performance sedan to the U.S. market later this fall. Is there anyone else who would like to get their hands on this beauty?