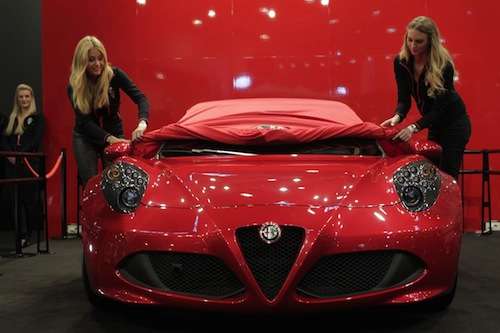 After the great success in Geneva, the all-new 2014 Alfa Romeo 4C is shown officially for the first time to the German public, but will they get excited about the Italian sports car?
Advertisement

When the all-new 2014 Alfa Romeo super compact sports car made its global debut in Geneva last month it created quite a stir. After all, the brand was marking the return of the Italian brand in the United States with the new sports car. Now the Germans get a chance to take a look at the new Alfa Romeo 4C for the first time as it makes the premiere at the Techno Classica Essen scheduled for April 10-14. But will the German public be excited to see the new Italian sports car?

How can the Germans get excited about the 2014 Alfa Romeo 4C when they have a whole host of the best performance cars made right in their own country? Taking a look at a partial list of cars makes us wonder. It starts with Mercedes-Benz who offers the AMG line with the SLS AMG. It has 638 hp and can sprint from 0-60 in 3.8 seconds. And we can’t forget about BMW who offers the M3 with V8 power and does not disappoint. BMW also has the M5 that is one of the fastest sedans on the planet. It’s 5.0-liter V10 pumps out 500 hp.

If that isn’t enough, the Germans also have Audi who makes the R8 sports car that comes with V8 power that produces 414 hp and a sprint time of 0-60 in 4.4 seconds and top speed of 187 mph. And lest we forget about the Porsche brand who has a whole stable of cars and SUVs. The most notable is the Porsche 911 GT2 RS which is the fastest sports car listed here. It comes with a massive 620 horsepower and can reach speeds of 202 mph.

The Germans will see the new 2014 Alfa Romeo 4C at the 25th edition of the Techno Classica Essen in Germany. But the German event is dedicated to showing vintage and classic automobiles. Alfa Romeo will give the German public its first exposure to the new 4C with an exhibition area with highlights from the past racing cars and future design.

Alfa Romeo will need to focus on technology

Will the German public get excited about the new 4C with a 1.7-liter, direct-injected turbocharged four-cylinder aluminum engine that will pump out 296 horsepower? They will most likely not be too impressed when it’s compared to with what their countries automakers offer. But Alfa Romeo knows they will have an uphill battle in Germany. So they will focus on the innovative carbon fiber technology to try to impress the German public.

The Germans will have the opportunity to discover one of the most innovative technological contents of the new 4C sports car, which is the carbon fiber chassis. The new chassis is made entirely of carbon fiber which plays a key role in its structural integrity. The carbon fiber was originally developed by Italian race car specialist Dallara for the Alfa 8C, Bugatti Veyron and KTM-Bow.

To emphasize the lightness, the particular structure is suspended on a stand and is surrounded by a transparent profile of the Alfa Romeo 4C which helps to contextualize the position of the body with respect to the bodywork. While the Germans may not be too impressed with the all-new 2014 Alfa Romeo’s performance, they might be intrigued with it’s technology.

Abarthman wrote on April 11, 2013 - 12:33pm Permalink
Actually, the Germans should be VERY impressed with the Alfa's performance. The Alfa, given it's light weight, should have a power to weight ratio better than virtually all the cars you mentioned, so it should be quicker, better handling, and better breaking, too. It will not compete on top end speed, which is a factor of ultimate horsepower and aero, not not too many folks drive over 155mph, even in Germany. Most of the German cars have speed limiters, so they don't go faster than that anyway. So, YES, the Germans should be impressed. However, they are VERY nationalistic; it doesn't matter how good stuff is from other countries, they will probably buy German anyway. And given the quality improvements at Fiat/Alfa/Ferrari, this will no doubt be a very good car.
Anonymous wrote on April 19, 2013 - 2:05am Permalink
@abarthman quicker than a Porsche 911 GT2 RS? Are you kidding? You obviously know nothing about cars. But I can confirm that Germans will not buy this toy since German cars are just better and Alfa Romeo has such a bad reputation in Germany that literally no one will buy that obvious clone of a Lotus. For that amount of money I would take the new Lotus Exige S over any 4c cause the Lotus would destroy the 4c on any road or track, not to mention the much better reputation.. Oh and btw, italians are much more nationalistic than Germans, they seem to stick their national colors on almost any car they produce
Anonymous wrote on April 26, 2013 - 9:42am Permalink
Porsche 911 GT2 RS comes with a +200.000€ price tag and looks the same for 40 years, now. Alfa 4C is a beauty, costs one third of the price, not to mention the fuel consumption. As for the nationalistic thing, Germans stick the "Made in Germany" to any car, or led to believe so, even for Seats and Skodas (at least before they break down).