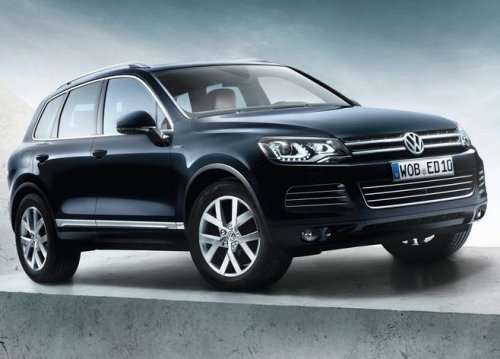 The 2013 Volkswagen Touareg is celebrating a significant milestone and the German automaker has built the new Edition X to mark the achievement.
Advertisement

It’s hard to believe, but the Volkswagen Touareg is turning ten years old. Volkswagen has just announced a new Touareg Edition X to celebrate the significant milestone for the crossover. The all-new Touareg made its world debut at the Paris Motor Show a decade ago this week. And now ten years later, Volkswagen is building a new special model with a number of exclusive features that will “satisfy the even most demanding of expectations,” according to the German automaker.

Those expectations would have to include the Touareg’s off-road ability, and that is what the new Edition X tries to bring to the table. The new special model gets larger wheels, special exterior paint, and other exclusive features inside and out. While most don’t have anything to do with taking the Touareg off the pavement, they will give buyers a special-edition model to stand apart from the crowd on the trail. Land Rover did a similar thing with the new 2013 LR4 bringing out the new Black Design Pack model.

On the outside, the new Touareg Edition X gets 19-inch ‘Moab’ alloy wheels, silver anodized roof rails, bi-xenon headlights, LED daytime running lights, and darkened LED rear light clusters. The special Edition X will also be offered with a Moonlight Blue Pearl Effect exterior paint that will be available as an option. A ‘Chrome & Style’ designer pack, that includes tinted side and rear windows and ‘Touareg X’ logos on the “wings” are also included in the optional package.

Luxury treatments in the cabin

The Touareg Edition X is available in Europe with a choice of five engine/gearbox combinations, including a hybrid version. Prices begin at $79,387 U.S. for the V6 TDI BlueMotion Technology with 201 horsepower mated to a eight-speed automatic transmission. Unfortunately, we won’t be seeing the new Touareg Edition X in the U.S. anytime soon.

Tesla Contemplates A New Strategy for China Retail even As Sales Boom
Jay Leno on Elon Musk & EVs: “I Think He Should Get ... Credit"
END_OF_DOCUMENT_TOKEN_TO_BE_REPLACED