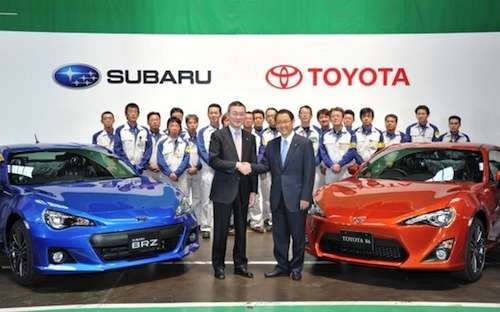 The all-new 2013 Subaru BRZ and Scion FR-S continue to pile up honors and have won their first award of the new year by being the best.
Advertisement

The all-new 2013 Scion FR-S and Subaru BRZ continue to get more awards and this latest is the first one of the year and possibly the best award they can receive. The Scion FR-S/Subaru BRZ captured the Best of 2013 award from Cars.com, an online review and consumer information website. The two sports cars won the joint award and it was announced at a Cars.com event surrounding the North American International Auto Show in Detroit.

Judges evaluated this year’s new and redesigned cars, and they praised the BRZ/FR-S for its driving experience and affordability. The two rear-drive coupes received the nomination for best overall car in December, and the cars first won the Cars.com best sports car category. To win the Best of 2013, the sports cars went up against the best SUV, midsize sedan, luxury sedan and pickup as well as the best hybrid won by the Toyota Prius c. This is the highest award the two cars could have been awarded, and it shows how well the cars have been received by the media and buying public.

The best automotive story of 2012

The joint effort between Subaru and Toyota has produced one of the best automotive success stories of 2012. What we are witnessing, is the global success of two Japanese automakers who produced an affordable, fun-to-drive rear-drive coupe. And buyers around the globe are snatching up the coupes faster than Subaru can produce them. Subaru had to increase production capacity at their Indiana plant in order to keep up with the demand.

Both companies have been thrilled with the results, and Toyota who owns a 16.5 percent stake in Subaru, is winning on both sides of the deal. “Winning the Best of 2013 award is an honor and evidence of the sustained energy around the FR-S,” said Scion Vice President Doug Murtha. “As many drivers have discovered, the FR-S is truly bringing the sport back to the car.” The 2013 Subaru BRZ is receiving as much if not more recognition, as they supplied the drivetrain and developed much of the mechanical design that went into producing the successful FR-S/BRZ sports car.

“Consumers frequently turn to online research before a vehicle purchase, so we are honored that Cars.com selected the FR-S as one of the best cars of the year and recognized its uniqueness in the marketplace,” said Scion Vice President Doug Murtha “By delivering a fun and accessible sports car, Scion expands its appeal with drivers looking for vehicles they can make their own.”

TopGear Australia, awarded the Subaru BRZ their “Fun Car of the Year award and said, “Using his unique powers, the Stig identifies the very reason we all end up voting for the Subaru as our Fun COTY. We’d love either one, but the BRZ handles better. A different suspension setting means it leans a little less and is even more composed than the Toyota on the slithers of tarmac…The 86 is the more slidey beast, and that means a hell of a lot of fun, too. But for those not looking to Sebastien Loeb their way around, the Subaru offers the more sensible, but still largely psychotic. option.”

The BRZ’s suspension is slightly stiffer at the front, which helps the car stay flatter through corners. But both cars are fun-to-drive and most driver’s would hardly notice the difference unless they are on the track. What both cars offer, is an affordable two-door sport coupe that delivers a fun driving experience. It will be fun to watch this year as the 2013 Scion FR-S and Subaru BRZ sports cars bring out some new performance goodies to make them even more fun.