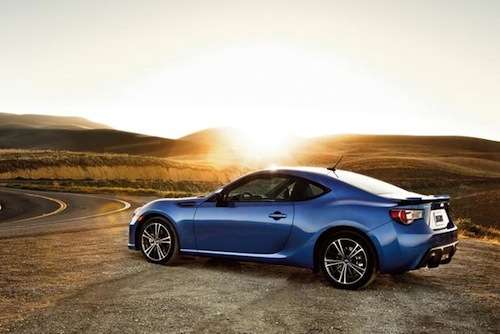 The new 2013 Subaru BRZ isn’t the most expensive sports car and doesn’t have the most power but is voted Fun Car of the Year by TopGear Australia against some stiff competition.
Advertisement

When you think of expensive cars that are fun to drive, the Porsche, Audi and BMW brands would all come to mind. In their annual TopGear Australia magazine Fun Car of the Year challenge, they took seven sports cars and test drove them to see which one was the "fun-est car" for 2012. The 2013 Subaru BRZ came out on top over some stiff competition. The BRZ was tested against contenders like the Porsche 911 Carrera, Audi RS5, BMW M135i, Ford Focus ST, Toyota GT 86, and Renault Megane RS265.

In a 14-page feature in the January edition of TopGear Australia magazine, they tested the seven cars where any driving enthusiast would take a sports car for a test drive. They chose a tight, twisty mountain hill climb to put the cars through some fun alpine driving runs. Besides its twin Toyota GT 86, even though the other cars were more expensive, they kept coming back to the BRZ to grab the keys and left the others sitting on the side of the road.

That’s no small feat to win the fun-est car award against the likes of the Porsche 911, RS5, Megane RS265 and BMW M135i. It shows that in order for a sports car to be fun, it doesn’t have to cost a lot of money. When Toyota and Subaru set out to create a new sports car, their goal was to build an affordable two-door rear-drive coupe that the average person could afford. And they succeeded in a big way. The Toyota GT 86, (Scion FR-S in the U.S.) and Subaru BRZ have been wildly successful.

What about the Toyota GT 86?

So what about the Toyota GT 86? Why didn’t TopGear Australia give the Fun Car of the Year award jointly to the two cars? TopGear says: “Using his unique powers, the Stig identifies the very reason we all end up voting for the Subaru as our Fun COTY. We’d love either one, but the BRZ handles better. A different suspension setting means it leans a little less and is even more composed than the Toyota on the slithers of tarmac…The 86 is the more slidey beast, and that means a hell of a lot of fun, too. But for those not looking to Sebastien Loeb their way around, the Subaru offers the more sensible, but still largely psychotic. option.”

Most drivers wouldn’t notice much difference between the two cars, but there are some differences. The mechanical parts are the same, but each brand has tuned the steering and suspension of their car for a slightly different feel. The BRZ’s suspension is slightly stiffer at the front, which helps the car stay flatter through corners. The downside is a slightly firmer ride. But this is what TopGear Australia could feel as they tested the two cars in the alpine turns. They also said, “On the tight, twisty, alpine hill climb where this test was done, the tiny changes in the suspension set-up between the two cars was enough to make the difference. The BRZ simply felt more composed, less tail-happy and thus faster than the 86…”

It isn’t that surprising that they would chose the BRZ over the GT 86 considering the suspension differences. But what is surprising is that they “lusted after” the Subaru over more expensive, powerful and sporty cars like the Porsche, Audi and BMW. The accolades keep rolling in for Subaru’s sport coupe and this latest award by TopGear Australia magazine isn’t the first for the BRZ.

If TopGear Australia thought the 2013 Subaru BRZ was fun, just wait until they test the new 2014 BRZ STI.