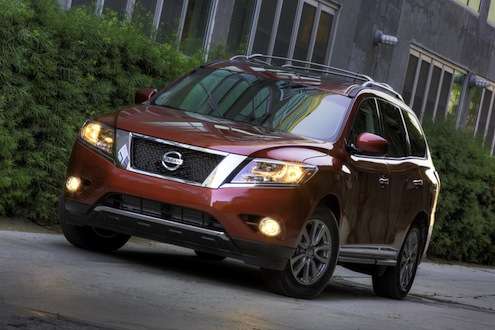 Nissan has announced the launch of the all-new 2013 Pathfinder that has been totally redesigned inside and out with improved fuel mileage.
Advertisement

Nissan has announced today the launch of the all-new 2013 Pathfinder that has received a complete makeover for the 2013 model year. The previous generation Pathfinder was outdated and needed a total update. And Nissan has come through in a big way with the 2013 version. The revamped SUV gets all-new exterior styling that is more aerodynamic, a new unibody platform, advanced technology and a new drivetrain that gives the 2013 Pathfinder best-in-class fuel economy.

The crossover SUV segment is very competitive and Nissan needed to update the Pathfinder to keep up with the competition and it looks like they have succeeded. The all-new SUV has been in the design room gym and has shed 500 pounds compared to the outgoing model. The weight reduction allows the new Pathfinder to achieve a best-in-class 26 mpg on the highway.

This is a significant increase over the previous model and also the competition. Nissan says in the announcement that the increase was achieved primarily through a new, aerodynamic exterior design, 500 pounds of weight reduction, reduced engine friction and the application of a class-exclusive, next generation Xtronic CVT automatic transmission. The new fuel-efficient 2013 Pathfinder is one of the lightest SUV’s in the segment with the front-wheel-drive model weighing in at just 4149 pounds and the 4WD tips the scales at 4290 pounds.

Other improvements feature a new unibody construction that reduces weight and Nissan says is stronger that the old truck-based platform. It also has the benefit of improved ride comfort and handling. Nissan says the new SUV will be quieter and have less vibration and harshness on the road.

Other improvements for the 2013 model

The redesigned Pathfinder gets a new aerodynamic exterior that cuts down on wind resistance and is more visually appealing. Inside, the all-new interior has seating for seven and is best-in-class in front headroom, front leg room and overall passenger volume. Pathfinder is now the only vehicle in the segment with a 3rd row seat recline.

Look for the redesigned 2013 Nissan Pathfinder to be in showrooms later this fall. Pricing has yet to be announced.