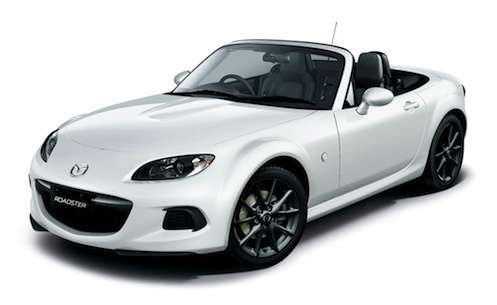 Mazda has announced details on the upgraded Mazda MX-5 Miata as the roadster makes its launch in Japan today.
Advertisement

Mazda has upgraded the new Mazda MX-5 Miata and has announced full details today as it makes its official launch in Japan. The refreshed two-seat roadster goes on sale today at all Mazda showrooms in Japan. The U.S. version is expected to arrive here in North America before the end of the year. The updated open-top sports car gets an aggressive new look and should be more fun to drive than the outgoing model.

The new upgrades start up front

The front of the MX-5 has been redesigned to have a more aggressive look with a larger front grille opening. It also gets a new front fog light bezel and a new front chin spoiler to add to the new look. The sports car will feature a new Dolphin Gray Mica body color, but the Metropolitan Gray Mica is gone forever. The 2013 Mazda Mx-5 will be available as an RS with a power retractable hard top, or the classic RS soft top version.

Inside, the new roadster will feature a new color, Glossy Dark Gray, that is used on the interior panels and steering wheel bezel. The leather seats will also come in a new tan color to contrast the Dark Gray. The sides of the seats will get a two-tone black treatment and a combination of Alcantara and black leather seat cover materials are available.

The outgoing Mazda Mx-5 Miata was fun to drive, but upgrades to the rear-wheel-drive sports car should make the new model even better than before. The 2013 MX-5 will feature an enhanced acceleration control on manual gearbox models along with new adjustments to the throttle management program. Maxda says the changes will make the sports car more responsive with the throttle down coming out of a corner.

With the addition of better acceleration, Mazda engineers also adressed the need to stop quickly. An enhanced braking control now changes the characteristics of the brake booster. The new brake upgrade should help the driver have more control during hard braking on the track.

A new Active Bonnet has also been added to the roadster that according to Maxda will enable the car at certain speeds, when sensors detect an impact exceeding a defined level, the rear end of the hood is raised. This creates a space between the hood and the engine which acts to absorb the energy of impact and reduces the severity of head injuries in collisions involving pedestrians.

The 2013 rear-drive MX-5’s powertrain hasn’t been changed and will still come with a 2.0-liter four-cylinder dohc engine rated at 167 horsepower and 140 pound-feet of torque. A manual or six-speed automatic with paddle shifters will be available on both models.   Mazda has not announced availability or pricing on the updated 2013 Mazda MX-5 Miata for the U.S. market, but look for details soon.