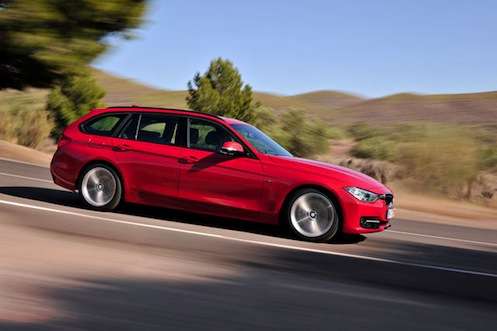 BMW has announced the latest 3-Series Sports Wagon will be offered in the U.S. in 2013.
Advertisement

If you like the BMW 3-Series, and sport wagons, then there is good news coming out of BMW. The German automaker has just announced that the next-generation 2013 3-Series Sports Wagon will be heading to the U.S. The new BMW 3 Series Sports Wagon will launch in Europe later this year as the 328i, 330d, and 320d Touring. The Sports Wagon is set to arrive on U.S. shores in Spring 2013.

Car And Driver is reporting that the U.S. market could see a diesel variant when the new Sports Wagon arrives here. Sources at BMW told them, “We haven’t given up on the diesel in the U.S. at all.” There is no information on whether there will be an M performance model, but it could also be a possibility for the sedan and wagon. Transmission options for the 3-Series Wagon include an eight-speed automatic or a sporty six-speed manual. Both transmissions will feature BMW’s Auto Start-Stop technology to help with fuel-efficiency.

When the 2013 3-Series sedan was revealed back in October, it was likely that the 3-Series Sports Wagon wouldn’t be far behind, and now the German automaker has made it official. In Europe, the BMW 3-Series Sports Wagon is known as the Touring model, but is the same variant and will feature more space for passengers and cargo than the current model. BMW says the new wagon will have 10 percent more cargo volume having 3.8 inches added to the car’s overall length and almost 2 inches to its wheelbase.

Inside, standard features include a 40:20:40 split/folding rear seat bench, an automatic tailgate with separate rear window opening, a separate partition net, and a luggage compartment cover. There's also a hidden storage compartment, and if the cargo cover isn't in use, it can be stowed under the cargo floor for added convenience.

BMW will offer its full complement of technology packages, like BMW Apps, a color HUD, Lane Departure Warning, Blind Spot Detection, BMW Parking Assistant, Rear-view Camera with Top View, and the BMW Assist telematics service. As with the 3 Series sedan, the wagon will be available in Sport, Luxury, and Modern lines, as well as an M Sport Line, each with their own unique interior and exterior trim features.

The 2013 BMW 3-Series Sports Wagon should cost about $2000 more than a similarly equipped sedan here in the U.S., and should do well competing with Audi’s A4 Allroad and Cadillac’s CTS Sport Wagon.