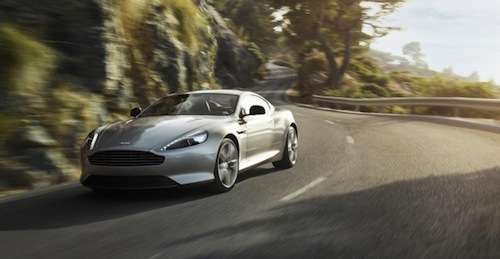 Aston Martin has just released details on the 2013 DB9 and the supercar gets a number of significant performance enhancements. The sports car has remained relatively unchanged since its introduction in 2004 and gets a significant bump in horsepower from the previous model. It also gets some exterior styling changes to give it better aerodynamic performance. Underneath, the chassis has been upgraded with greater stopping ability.

The 2013 Aston Martin DB9 sees the introduction of a new generation V12 powerplant. The new engine sees a significant increase in horsepower from 470 to 510 horsepower. The torque increases to 457 lb ft which is a 14 pound increase. The increase is a result of Aston Martin engineers making changes to the block and heads which include dual variable valve timing, enlarged throttle bodies, larger fuel pump, revised intake, and polished combustion chambers.

The DB9 also gets performance upgrades to the braking system. The 2013 sports car now uses as standard, Carbon Ceramic Matrix (CCM) discs and calipers supplied by Brembo. The new brakes will resist fade and heat when pushed to extremes on the track. The discs are cross-drilled for added performance by keeping them clean and cool.

Inside the cockpit of the new DB9, buyers wanting more sport can order optional lightweight seats. These are available when the 2+0 seating option is selected and use a state-of-the-art carbon fiber and Kevlar composite structure. The light-weight seats offer more support at the shoulders for more spirited driving.

The new-generation DB9 is definitely improved over the 2012 model and Aston Martin engineers have made a number of key performance enhancements that performance enthusiasts will appreciate. The new DB9 also adds a more pronounced rear boot ‘flip’ to further enhance the aerodynamic performance of the car.

Aston Martin Chief Executive Officer Dr Ulrich Bez said: “I am very excited to be unveiling the new DB9 now. My team here at Gaydon has been working hard for many months to improve and update key aspects of this superb Sports GT – the mainstay of our sports car range – and I believe the results to be exceptional.

Inside, the cabin is upgraded with standard leather that comes on the Virage and features a narrow strip of leather between seat panels. Glass switchgear is used throughout the luxurious interior, rounding out the high-end features of the 2013 model's upgrades.

The new 2013 Aston Martin DB9 starts at $185,400 U.S. which is a price cut from the outgoing model. The first deliveries will begin in November.