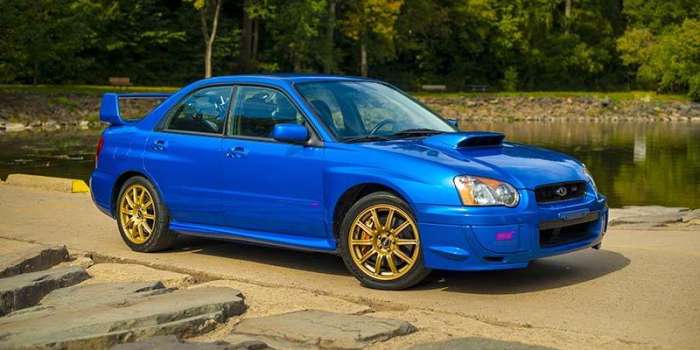 Subaru is ready to launch the all-new 2015 WRX STI. Meet the first STI, the 2004 WRX STI that started it all here in the U.S.
Advertisement

Some cars are destined to be great, others are just vehicles that are good for transportation. The Subaru WRX STI is one of those vehicles that changed the performance car landscape around the globe. The WRX STI has a cult-like following and is a car that in just a few short years is already a performance icon.

The first WRX STI arrived in the U.S. in 2003 at the NAIAS in Detroit. It followed on the heals of the Subaru WRX that launched in 2002. Subaru brought out the first WRX STI in 1998 and it launched in Japan, Australia and the UK with much success. But Subaru didn’t know how the performance car would be received in the U.S. The 2002 Impreza WRX was a resounding hit with performance enthusiasts and Subaru then launched the WRX STI the following year.

The STI for 2004 received some major updates for its U.S. debut in Detroit in 2003. Subaru wanted to trump Mitsubishi’s performance model, the 271 horsepower Lancer EVO, and needed to come out with something very special. The all-new 2004 STI came with a new powerplant that was developed just for this car. It was an all-new 2.5-liter turbo engine that developed 300 horsepower. Immediately after it came out, it was one of the fastest cars available.

It looked much like the WRC Rally championship car that won the previous year. The all-new 2004 WRX STI was a super fast car and came with Brembo brakes from the factory, BBS gold forged aluminum 18-inch performance wheels, a large wing on the deck lid and a big hood scoop to feed the turbo intercooler. The new 2.5-liter mill powered the new STI to 0-60 in 4.6 seconds and a top speed of 155 mph.

The 2004 model looked very similar to the rally car and fans here in the U.S. were already familiar with it because of the motorsport. So when the 2004 WRX STI launched here in the U.S., it was an instant success. Since its inception in 1998, the STI has grown into a performance icon and a legendary rally vehicle. Today, it’s still a performance car that enthusiasts can’t wait to drive.

Dominick Infante encourages any performance fan that if they have a chance to pick up an old 2004 WRX STI to “go for it” they won’t be disappointed. A quick perusing through the for sale ads show the 2004 WRX STI is already becoming a collectors item here in the U.S. Models are going anywhere from $12,000 up to $25,000 depending on condition.

In 2004, U. S. performance enthusiasts received their first taste of the Impreza WRX STI. Now we are waiting for the unveiling of the all-new-generation 2015 WRX STI that will be unveiled at the same NAIAS show in Detroit where it all started here in the U.S. back in 2003.

John Goreham wrote on December 20, 2013 - 4:49pm Permalink
You are absolutely right about the title statement. The only car that even comes close is the Civic SI. Imagine how many enthusiast sales Chevy (Camaro) and Ford (Mustang) lost by not having cars like that to offer all those years.
Tanguchi takashi wrote on December 21, 2013 - 11:12pm Permalink
They are 17 inch bbs actually