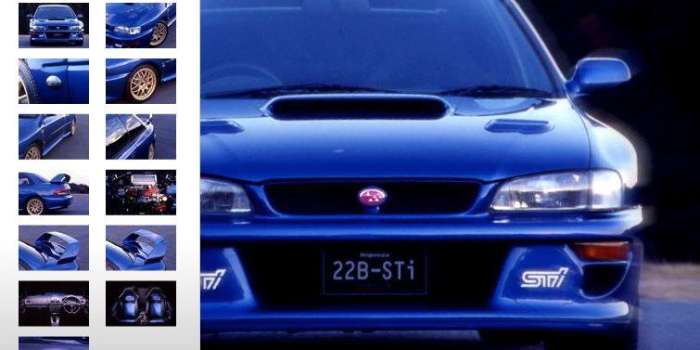 Subaru introduced the very first WRX STI back in 1998 and was it was called the "Impreza 22B-STi”. See what started it all as we get ready for the launch of the 2015 WRX STI.
Advertisement

Subaru launched the very first WRX STI back in 1998, and it was a forerunner of the 2015 WRX STI that will be launching next year. This was the Halo STI that started it all for the Subaru Impreza. It was built for Subaru's celebration of their 40th Anniversary as well as the third consecutive manufacturers' title for Subaru in the FIA World Rally Championship (WRC).

Subaru produced the "Subaru Vintage Garage" series video, and this episode is on the legendary "Impreza 22B-STi version" released in 1998. This Subaru Impreza 22B STI is one of the rarest & most sought after Subarus of all-time. Only 424 of these vehicles were ever produced and we don’t know exactly how many are still around. They were snapped up by enthusiasts in just 24 hours. Subaru transferred the technology from the rally cars in 1998 to this first STI street version.

The vehicle was only sold online for a limited time and sold only for the Japan market. This was before the U.S. became Subaru’s number one market in the world. There are only two of these super-rare cars that have been shipped to the U.S., and Subaru used one for the video below. This was the first Impreza model to get the flared fenders and an adjustable STI wing on the rear deck.

The 1998 Impreza 22B-STi came with a 2.2-liter turbocharged Boxer engine and it was very unique. It had a closed-deck design with a different block than the existing Subaru 2.2-liter engines. It also featured high-performance heads that allowed for better flow and had higher turbo boost for better performance. It came with more horsepower than the previous Subaru 2.2L powerplants.

The 22B-STi sports coupe DOHC engine produced 206kW at 6000 rpm and 360Nm of torque at 3200 rpm. The close-ratio five-speed manual gearbox and center differential with adjustable torque-split showed it was hot stuff in its day. And it also featured Subaru’s full-time all-wheel-drive (AWD).

This first Impreza STI featured the DNA that we see in all the STI cars that are produced by Subaru. Tecnica International (STI) is the high-performance division of Subaru. It came in one color, the Blue that was patterned after the same color as the Rally cars, and it came with gold BBS wheels. After Subaru saw how successful this first Impreza STi was, they decided to bring it to global production. The first hot WRX STI models wouldn’t see U.S. soil until 2004 and launched in March that year around the globe.

Watch as Dominick Infante gets suited up in his blue Rally car suit and takes the right-hand-drive 1998 Impreza 22B-STi from Japan out for a test drive. This is the latest video from Subaru of America's "Subaru Vintage Garage" series on the legendary "Impreza 22B-STi version" released in 1998. See what started it all as we get ready for the launch of the 2015 WRX STI.