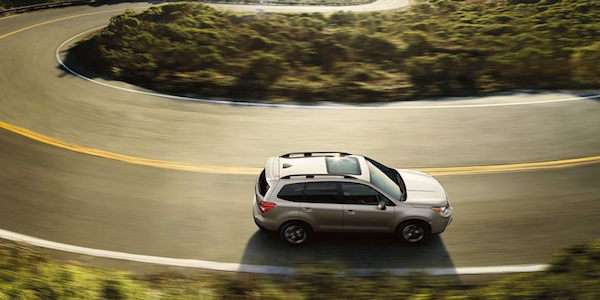 Subaru released details on the new 2017 Subaru Forester. It gets at least 20 new upgrades.
Advertisement

Subaru isn’t standing pat with the top-selling vehicle in their lineup. They have updated the new 2017 Forester with no less than 20 new upgrades. The new enhancements will include revised styling, new driver assist technology, more interior comfort, enhanced driving performance, and better fuel economy. Check out the upgrades on the new 2017 Forester all-wheel-drive small SUV.

It all starts with safety for Subaru. It’s the brands number one priority when they upgrade their multi-purpose models. For 2017, Forester gets an updated EyeSight Driver Assist Technology. It will feature new color cameras that provide a wider, longer field of vision for increased safety. The updated system comes with Lane Keep Assist, which gently guides the Forester back to the center of its lane if sway is detected. Forester Limited, Touring and Premium models equipped with EyeSight now include Blind Spot Detection and Rear Cross Traffic Alert.

Other new safety features will include newly available High Beam Assist that automatically switches the headlights between the high and low settings depending on driving conditions. Steering Responsive Headlights are also being added which aims the headlights around curves for improved illumination. Both features are standard on all 2.5i Limited, 2.5i Touring and 2.0XT Touring models equipped with EyeSight.

Reverse Automatic Braking will be included on 2017 Limited and Touring models equipped with EyeSight. This system detects any large objects when the vehicle is moving in a low speed in reverse. The preventative system uses four ultrasonic sonar sensors located in the rear bumper cover, and will automatically stop the vehicle if the driver does not respond.

2017 Forester now comes with a refined front bumper cover for naturally aspirated models and a new hexagonal grille. The mid-size SUV also comes with redesigned headlights with Subaru’s signature C-shaped motif and a black inner bezel. The rear lights now feature a prominent C shape with LED illumination. A body color matching rear spoiler is now standard on all Premium models. 2017 Touring models get a new Sepia Bronze Metallic exterior color. Two new high-contrast black and machined finish aluminum alloy wheels have been added. The 17-in wheels are standard on 2.5i Premium and Limited models, 18-in wheels are standard on 2.0XT trims.

The Forester lineup gets a new heated steering wheel for the first time. It comes standard on 2.5i Touring and 2.0XT Touring models. They also feature Keyless Access with Push-Button Start. Other new amenities include two-position memory seats, auto up/down on both driver and front passenger windows, and automatic climate control which are now standard across multiple trims. A power liftgate is now offered on the 2.5i Premium model.

Newly added soundproofing to Forester will make it quite than the outgoing model. It gets thicker door glass and restructured door seals that will reduce wind noise. Added insulation underneath and an acoustic windshield will contribute to the 2017 Forester’s quieter, more refined interior.

The new 2017 Forester XT trims will get improved handling by way of the WRX and WRX STI performance models. The performance-enhancing Active Torque Vectoring will be standard on Forester 2.0XT Touring with EyeSight. The system helps in tight corners by reducing understeer. Forester XT also gets a quicker steering gear ratio for improved handling and response to driver inputs. Premium, Limited and Touring models with CVT automatics now come standard with X-Mode traction assist and also incorporates Hill Descent Control. Subaru says the gear ratio in the CVT has be updated to optimize engine control resulting in a smoother, more linear acceleration.

Improved fuel-economy for 2.5i CVT

Elon Makes a Cybertruck Statement With an Action, But Quiet in Words
Tesla's Record Month in China: Doubled Registrations in March 2021
END_OF_DOCUMENT_TOKEN_TO_BE_REPLACED