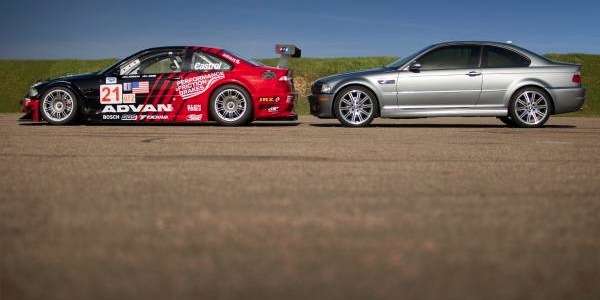 BMW has a rich race history with the M3 and they brought two examples to Sebring International Raceway this past weekend. BMW did it to commemorate the 40th anniversary of BMW's overall win at the Twelve Hours of Sebring 1975. It started with the 1975 BMW 3.0 CSL racer that was the forerunner for BMWs successful M3 we see today.

The first BMW M3 E30 was built so it could run in Group A Touring Car racing and BMW needed 5,000 production models in order to meet the minimum number. BMW only intended to build 5,000 M3s, but they ended up building nearly 18,000. The car was built for the race track and the M3 philosophy was born. The sports car went on to be an icon and is in its fifth generation of greatness.

The original philosophy of the M3 was to provide a good daily driver that owners could also take to the track and drive hard. It was designed by BMW to be a track-capable car. BMW M division developed the engine, brakes, cooling system and suspension to provide a very emotional enjoyable driver. The original 1986 M3 employed race-car technologies and concepts into a daily driving sports car. That’s still the M3/M4 philosophy today we see in the 2015 M3/M4 fifth-generation car.

BMW USA Classic was well-represented at this weekend’s Classic Motorsports Mitty Speedfest, which took place at Road Atlanta in Braselton, GA. BMW racer, Boris Said, was this year’s Grand Marshal for the vintage races featuring over 300 entered cars. Said was an integral part of the BMW Team PTG years, co-driving to many victories including the Rolex 24 At Daytona, the 12 Hours of Sebring, and the Petit Le Mans. Said is the only American to have won overall at the famous Nurburgring 24 hour race, co-driving a BMW Motorsport M3 GTR in 2005.

Motorsports fans were able to enjoy the sites and sounds of the legendary BMW M3 sports cars that have a close connection to motorsports over two decades of development and learning through competition in the racing environment. Their track-bred driving dynamics is why they have such a popular following with performance enthusiasts.

Bookmark my Subaru page and be sure to follow the latest 2020 Subaru Outback model change reports on Facebook, Twitter, Instagram, Subaru Report. Tweet your Subaru news tips to us @SubaruLegitNews and we'll give you a shout out! Be sure to check back tomorrow for more Subaru news and updates.