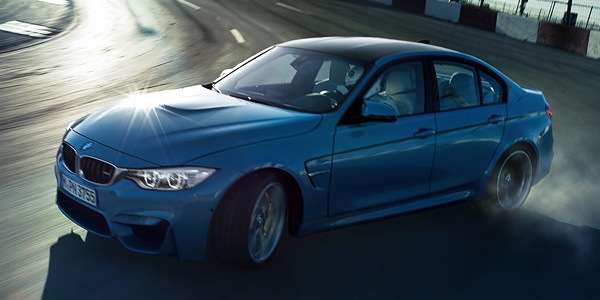 Just how far does BMW M go to ensure that owners and their mechanics know what car they are driving and working on? Great lengths on the new BMW M3!
Advertisement

Apparently BMW M GmbH doesn’t want anyone, especially those working on the performance cars, to forget what car they are handling. BMW says it’s the most powerful letter in the world and they don’t want you to forget it. It’s the most powerful letter, moreover it’s the most prolific letter on any performance car on the planet. That’s what Car and Driver found out while they were measuring the long-term brakes on the 2015 BMW M3, and decided to have a little fun. They began counting all the M badges on the car and found an astounding 67 of them on the M3.

Most of the badges are underneath the M3

They had a simple plan and it was to count the number of M badges that were in plain sight. Most of the badges are on the undercarriage of the new M3 and this is where they found 39 of them. The engine undertray featured three M stampings, the exhaust shielding and underbody sound-deadening material each had two, the front suspension had 8, The rear suspension had another 20 between its multiple links (control arms, toe links, uprights), and there is one on each rear wheel-well liner.

There’s more under the hood and inside

There are 12 more M badges affixed on the brakes and wheels, 4 on the body panels, and 5 more underneath the hood of the performance car. Step inside, and the M3 gets M labels on each front door sill, the driver’s dead pedal, the M steering wheel, and the shift knob. There’s also an illuminated M on each front-seat backrest, while another two glow from the gauge-cluster display screen when a door is opened. This raises the total M badges on the 2015 M3 to an astounding 67.

The new 2015 BMW M3 is unmistakably an M and BMW doesn’t want anyone to forget it. We are wondering just how much all those M badges add to the cost of a new BMW M3?