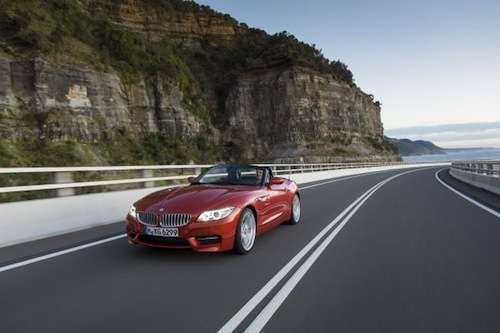 The 2014 BMW Z4 Roadster that is set to arrive early next year gets a few updates but isn’t much more than a mild refresh.
Advertisement

The “new” 2014 BMW Z4 Roadster details have been announced by BMW and it will come next spring with a few updates for the 2014 model. The selection of driver assistance systems and BMW ConnectedDrive mobility services available on the BMW Z4 have been expanded. The 2014 Z4 also gets three new color choices, new wheels and a new Hyper Orange package. The updates for the 2014 BMW Z4 aren’t all that extensive and are really just a mild refresh for the Roadster. Here are the details on the 2014 Z4.

A new Mineral Grey metallic, Glacier Silver metallic and Valencia Orange metallic exterior paint finishes are new for the 2014 Z4, which can only be ordered together with the new Hyper Orange package. If you like orange, this package features a contrast of black and orange. The bespoke Alcantara door panel trim, along with the lower section of the instrument panel, comes in orange.

The black leather seats have contrast stitching in Valencia Orange with an accent stripe running down the central section of the backrests and seat cushions. Another exclusive element of the Hyper Orange package is the metal weave trim strip, which can be combined with high-gloss black for the door openers and the gearshift or selector lever.

Other new interior additions include high-gloss black surrounds for the central air vents and the iDrive control system’s folding Control Display, which comes as part of the optional navigation system. Fineline Anthracite wood has been added to the selection of interior trim strips available as an option for the new BMW Z4.

The BMW Z4 will still be available with the same three powerplants which feature BMW’s TwinPower Turbo technology. The BMW sDrive28i features a TwinPower turbo 2.0-liter four cylinder engine, which produces 240 horsepower and 260 lb-ft of torque. It launches the BMW Roadster from 0-60 in 5.5 seconds with the 6-speed manual (5.6 with the 8-speed automatic) and returns EPA mileage estimates of 22 mpg city/ 34 mpg highway and 26 mpg combined with the manual and 24/33/26 for the 8-speed automatic).

The top-range Z4 sDrive35is features a high-performance version of BMW’s N54 producing 335 hp and 332 lb-ft of torque and comes mated to the seven-speed DCT. The top Z4 model goes from 0-60 mph in just 4.8 seconds with the same EPA mileage estimates.

The range of driver assistance systems and mobility services from BMW ConnectedDrive have been expanded for the new BMW Z4. It can be ordered with new features like High Beam Assistant and Park Distance Control. If the navigation system is specified, the ConnectedDrive Services options allow use of internet-based information and entertainment services inside the car.

The new system allows drivers to use BMW apps to receive web radio stations, display Facebook and Twitter posts on the monitor and ask for them to be read out. The range of BMW ConnectedDrive features available for the new BMW Z4 also includes BMW TeleServices, BMW Remote Services, Concierge Services and enhanced Automatic Collision Notification with automatic vehicle location and accident severity detection.

Even though BMW is calling the 2014 Z4 "new", there isn't too much to get excited about unless you really like orange. Pricing will be released closer to the 2014 BMW Z4 Roadster being launched which is set for spring 2013 here in the U.S.