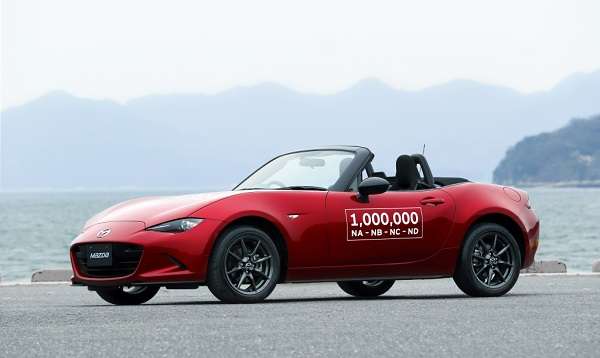 The Millionth Mazda MX-5 Miata Tour is coming to a location near you. Here are the times and dates.
Advertisement

In celebration of the one millionth Miata being build this year, Mazda is taking the vehicle on a worldwide appreciation tour to thank fans and owners for their loyalty. The Mazda MX-5 Miata is now the best-selling roadster of all time, as well as being one of the most raced cars in history. The U.S. legs of the world tour start in three weeks.

The one-millionth MX-5 Mazda Miata starts its 18-stop U.S. tour at Raceway Laguna Seca for the Monterey Motorsports Reunion from August 18-21. From there it will head out for stops across the country where fans can sign the car and receive commemorative gifts. The 15th Miata ever built, a 1990 model will join the 1-Millionth car, a right-hand Japanese-Market 2016 car featuring the 1.5-liter engine we don't use in the U.S.

The full list of places and dates is below. Interestingly, Mazda chose the locations based on sales history. Thus, Mazda is rewarding the most loyal and enthusiastic markets.