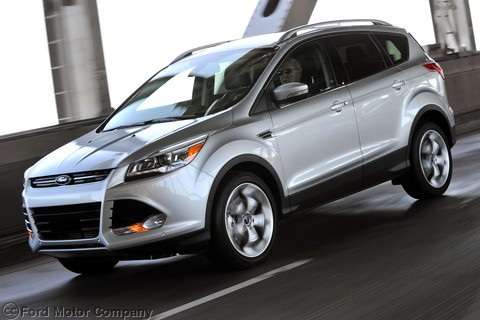 Will the 2013 Ford Escape be branded a lemon

Multiple recalls of the new 2013 model Escape are starting to raise eyebrows.
Advertisement

The all-new 2013 Ford Escape is a bold departure for the previous model. Is this a cause for concern? When automakers introduce an “all-new” car the truth is that it is almost always a lie. Automakers have learned the hard way that if they introduce a new chassis, a new infotainment system, a new engine, or a new transmission, that they do have some risk of problems. Handling these problems is part of the cost of doing business. To be safe, most manufacturers now carry over either the drivetrain or the chassis (body, suspension, etc) and the car is usually only half-new. Warranty and recall procedures keep the customers safe and happy, and the model eventually works through the minor glitches that almost any car can suffer. However, if an automaker has the daring to change all of these things at once the small problems with each system can reach the tipping point and the car can be labeled a lemon. Ford has made that gamble with the 2013 Escape and it really is "all-new."

Escape Hatch Nifty, but Troubling
The 2013 Ford Escape is a fantastic automobile. At Torque news we have reviewed the vehicle and our analysis has been a thumbs-up. This author has driven the vehicle and found it to be a game-changer in the class. That said, we did have concerns that should be noted. One of the novel features of the 2013 Escape was the automatic rear hatchback. When mom waves her foot under the rear bumper the tailgate ascends as if she has used the Force. During our testing, that feature did not work. We chalked it up to an early model. Perhaps even a pre-production model. However, the recalls are starting to mount.

Escape Engine Recall
Ford today recalled the 2013 Escapes that have its best engine, the 1.6 liter EcoBoost turbo, saying it may have a fuel line problem that could cause a fire. Ford issued a press release stating “As an additional safety precaution, customers who already own 2013 Escape vehicles with the 1.6-liter engine are being advised to stop driving their vehicles and to immediately contact their dealers. Dealers will deliver a loaner vehicle to these customers and will transport their 2013 Escape to the dealership for the necessary repairs. The company is working to make parts available as quickly as possible and customers will keep the loaner vehicle at no charge until the repairs on their vehicle are completed.“ The words “stop driving” and “Immediately” are not words that a customer just receiving their first payment reminder is going to be happy to hear. Click here for a look at the new Escape engine fire recall.

Escape Braking Recall
This is not the first recall of the 2013 Escape. The vehicle has also been recalled for braking problems. That recall seems almost unforgivable given that it is eerily reminiscent of the carpet obstruction issues that have caused Toyota so much recent pain. Making things even tougher for Ford, the previous generation vehicle has also now been recalled for unintended acceleration problems. Although that car is almost entirely different than the current one, more bad press with the words “Escape recalled” is not a good thing.

Ford's Quality
Ford's quality is world-class, and when it chooses to Ford can make the highest quality products in the market, as proven by its number two ranked Lincoln brand in last year’s J.D. Power Initial quality survey. Ford also took Jaguar and Volvo, both brands that struggled with poor attention to detail for decades, and turned them into fantastically reliable brands – and then sold them at a loss.

Ford can make this right, and it will. The only question is will the Escape be branded as a problem-car?

Anonymous wrote on July 19, 2012 - 8:55pm Permalink
they shouldve just said it was for no brake pads or steering wheels falling off and bundled the recalls like chevy did with the cruze 2 for1 and the mags wouldve told everyone how wonderful it is so sales would keep going up
nini wrote on January 7, 2016 - 7:51pm Permalink
My Ford is a total lemon. Ive had so many repairs its not even funny. The transmission is currently blown out. Its sitting at the dealership until they can figure out what went wrong, really. This vehicle has been in the shop at least 20 times for major repairs. No more Fords for my family.
Vincent Blocker wrote on June 8, 2016 - 10:55am Permalink
What did you end up doing?
Steve Iacovo wrote on August 10, 2016 - 7:53pm Permalink
Our 2013 Escape has been in the shop since the day we got it... Now we need a new transmission. They want $6,000 for it... This is our 3rd ford and we will never own a Ford again!!!
Kathleen Stephenson wrote on July 8, 2016 - 10:44pm Permalink
My 2013 is at dealer with broken transfer case and transmission fell out due to loss of bolts. Hopefully powertrain warranty will cover it.
Vincent Blocker wrote on July 9, 2016 - 8:53am Permalink
And the thing about this is; I LOVE THIS CAR! Like, this is my dream car! Since day one I can remember I test drive the Ruby Red Ford Escape, and it was perfect. I fell in love! Thats why this really hurts when Chester (My Escape) keeps having issues. That, and I'm a college student and CAN'T afford these expensive car repairs!
Judy. Johnson wrote on September 20, 2018 - 6:36pm Permalink
I bought a used 2013 Ford Escape with 76.000 miles and had to do a Repair because it had a antifreeze leak that caused the Engine to heat up and stall the water pump had to be Replaced at 870.00 Engine check light is still on.
Judy Johnson wrote on March 5, 2020 - 10:17am Permalink
I have owned a 2013 ford escape for 3 years now and my repairs are endless.This car should be recalled as a lemon. I'm stuck with it because I still owe eight thousand dollars on it and now I have a valve cover gasket leak. Ford should have to recall these problem cars or go to court and ordered by the court to recall them if we all send in complaints maybe at some point they will.
John Goreham wrote on March 5, 2020 - 10:49am Permalink
Judy, thank you very much for your comment. When I wrote this story eight years ago I wasn't sure if I should or not. Now were are glad we gave folks fair warning.
Marie Pressley wrote on October 30, 2020 - 1:01pm Permalink
This car has had so many recalls they have fixed them every oil change! Now it’s at the dealership it had to be flat towed only to find out water pump froze destroyed serpentine belt which then threw off timing chain and blew the engine and wiring harness according to the dealer ! I think they’re not giving me the truth I believe the engine seized and destroyed everything ! It’s my husbands car and I’ve never liked it from day 1. He is currently dealing with it! This SUV is a rotten lemon and should be on a Ford buyback!!
John Goreham wrote on October 30, 2020 - 4:01pm Permalink
I almost never name a car a lemon. I took a risk on this one and your comments make me feel like I did the right thing. I know many Ford people and without exception, they are good-hearted and want to do what's right. I hope you end up with an outcome you can live with.
Judy Johnson wrote on October 30, 2020 - 10:06pm Permalink
Dear John Foreman:thanks for your comment on Ford motor People.the ford motor co hasn't tried to help me at all with my 2013 ford Escape and I never heard back from them at all after writing to them with all the problems I have had the most dangerous thing was it drives without touching the peddle at times. I'm still waiting to hear back
Judy Johnson wrote on August 23, 2021 - 9:53am Permalink
I have problems again with my 2013 ford escape se it is over heating with a engine coolant reservoir overflow hose leaking I'm stuck at home till the dealers part comes in I'm sure it will cost a lot to put that on I still haven't heard anything back from Ford.