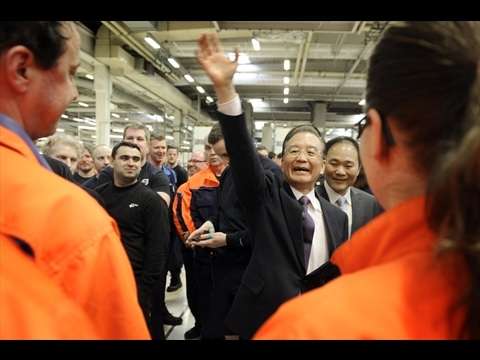 When discussing Volvo people often refer to the automaker as a Swedish company. That may be one way of looking at it. However, Volvo Car Corporation is owned entirely by Geely Holding Group based in Zhejiang China. Just as Honda owns Honda America, which designs and manufacturers cars in the US, Geely owns Volvo who designs and manufactures cars in Sweden.

Americans sometimes forget that there are already Chinese cars being sold here. If anyone had any doubt how seriously the Chinese take this situation, a visit this week to the Volvo Gothenburg plant by The People’s Republic of China’s Prime Minister, Wen Jiabao, should help to clarify things.

Hosted by Volvo Car Corporation’s Chairman, Li Shufu, and President and CEO Stefan Jacoby, the visit was also attended by Swedish Enterprise Minister Anni Lööf, and other representatives of both the Chinese and Swedish governments. During the Prime Minister’s visit he had the chance to witness a live crash test. In addition, the Prime Minister walked the factory floor and spoke with a number of Volvo employees at the final assembly section of the line.

Prime Minister Wen, and President and CEO Jacoby, then jointly addressed employees to discuss the bonds between the manufacturing plant, the company, and the two countries. Referring to the visit, Mr. Jacoby said "We were naturally deeply honored and very pleased to welcome Prime Minister Wen to the Gothenburg facilities and headquarters of Volvo Car Corporation. We hope we have been able to offer Prime Minister Wen a glimpse of what makes this company so unique: our leading position in safety, our loyal and talented workforce and our wide portfolio of truly premium cars."

Geely took over Volvo about a year ago. When the acquisition was made the company announced it would invest billions in new plants including manufacturing of Volvo cars in China to serve that market. The end goal of course was to increase sales dramatically.

In 2010 Volvo sold about 373,000 vehicles, with only about 10 percent of that volume in China. The plan includes dramatic increases in that market. Unlike the usual Asian formula of starting with economy cars, China is taking a dual path. Not only are there low cost manufacturers in China, but the Volvo acquisition also gave a Chinese maker direct access to the premium market as well.

Toyota's First EV Will Have a Name of BZ: Toyota BZ
First Videos From Inside The Boring Company's Las Vegas Loop
END_OF_DOCUMENT_TOKEN_TO_BE_REPLACED