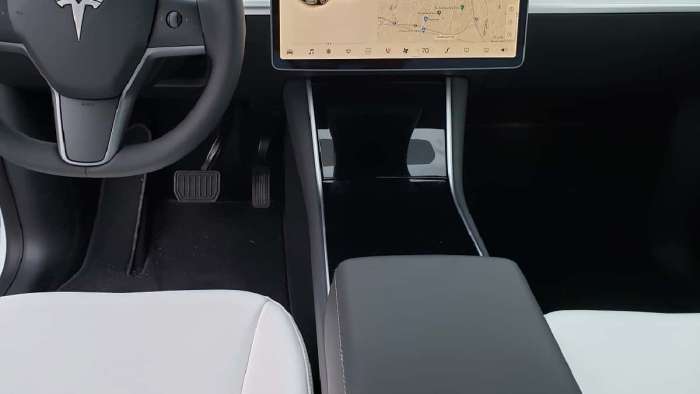 A new video showing a Tesla Model Y on Autopilot without a driver illustrates perfectly why changes to Tesla's Autopilot system are needed now.
Advertisement

After a recent double fatality involving a Tesla automobile, safety groups, and Tesla fans and critics alike, have amped up the discussion around the company's driver-assist systems. The misleadingly named "Autopilot" from Tesla and its future product named "Full Self-Driving," are both coming under increased scrutiny as Tesla further develops its "self-driving" or more aptly named, "self-crashing," technology.

To illustrate just how easy it is to defeat the simple mechanical sensors Tesla uses to prohibit improper use of Autopilot, Consumer Reports grabbed the closest bike lock and some rolls of tape to defeat the crude safety lockouts. Simply dangling any weight from the wheel tricks the Model Y's rudimentary sensors into thinking an operator has his or her hands on the wheel.

Senior tester and mechanical engineer, Jake Fisher, quickly and easily brought the Tesla Model Y the group owns up to speed on a closed test course without any occupant in the "driver's seat." The simple way the Tesla safety systems are defeated is shocking.

Related Story: Tesla Autopilot Can Function Without An Operator In The Vehicle

As the video demonstrates, Tesla has no meaningful safeguards to prohibit the abuse of Tesla driver-assist technology. The safeguard that does exist is practically "stone-age" technology compared to what most other automakers now employ to monitor driver attention and alertness.

As you can see from the video, it is quite simple for a numbskull Tesla owner/occupant to defeat the primitive safeguards Tesla uses to protect the public from improper occupant use of Autopilot.

Autopilot has been implicated in many crashes of many different types of Tesla vehicles into fixed objects, slow-moving semi-trailers, police vehicles, firetrucks, and other first-responder vehicles. The real question isn't why is Autopilot malfunctioning, but rather, why aren't Tesla's automatic emergency braking, lane-keeping assist, and other now commonplace safety systems taking over before these crashes occur? Where are America's multiple highway safety groups on this issue, and why haven't they taken decisive action?

You can view a list of some of the notable Tesla crashes related to the questionable performance of the brand's safety systems below.

March 2021: Another Tesla Hits Another Semi From the Side - This Time It Looks Like a Model Y
August 2020: Tesla Operated By Full Self Crashing System Hits Two Parked First Responder Vehicles - Again
July 2020 - Police: Tesla On Autopilot Hits Not One, But TWO Parked First Responder Vehicles
January 2020: Second Crash In One Month Of A Tesla Into A Parked Firetruck Results In Fatality
December 2019: Tesla Model 3 On Autopilot Hits Yet Another Police Vehicle - Why Won't They Stop?
August 2018: Third Tesla Crashes Into Back of Firetruck - That's Four Crashes Into Emergency Vehicles This Year
May 2018: Another Tesla On Autopilot Hits Another Emergency Vehicle - You Can't Make This Stuff Up
January 2018: Tesla Police Blotter News - Tesla Driver Hits Parked Firetruck - Blames Autopilot
July 2016: Understanding the fatal Tesla accident on Autopilot and the NHTSA probe

Sam wrote on April 23, 2021 - 7:54pm Permalink
I think this article is very misleading. In my Toyota Prius, I can put a rock in the accelerator pedal and leave the car, the car will drive without anyone. The CR video also very stupid idea and showing the world how to perform illegal activity.
DeanMcManis wrote on April 26, 2021 - 2:35am Permalink
I think that the government does need to intervene in stopping false accusations and by forcing media outlets and websites to retract and correct misleading and false information specifically designed to lie to people about safety systems like Tesla's Autopilot. It is interesting that Marta Tellado, who was a top executive at the Ford Foundation, is the new president and chief executive officer of Consumer Reports. And is driving anti-Tesla FUD articles. Regular (foolish) drivers of gas powered cars drive with their feet, or put on cruise control and have the car drive itself, drive while texting, and purposely defeat safety systems, which leads to crashes, injury and death. It is not the responsibility of the automakers to make 100% sure that drivers cannot hack safety systems, because that is NOT possible to do. The CR video is irresponsible and bad journalism, specifically created just to damage Tesla's safety reputation.