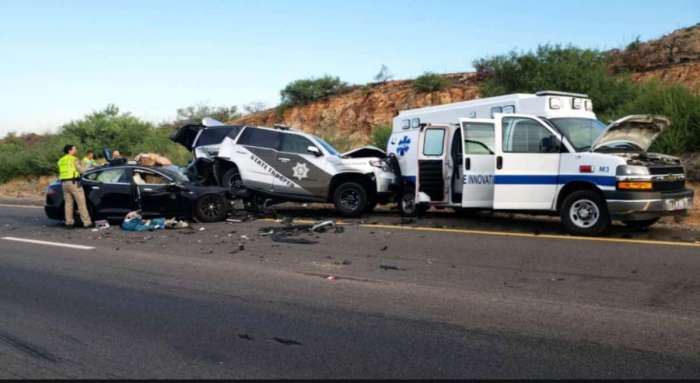 Police: Tesla On Autopilot Hits Not One, But TWO Parked First Responder Vehicles

Arizona police say that a Tesla being operated on Autopilot crashed into both a police vehicle and an ambulance.
Advertisement

"Early today, a sergeant was working a collision scene on EB I-10 near Benson when the driver of a passing Tesla rear-ended his patrol vehicle. The impact caused the patrol vehicle to collide with the back of an ambulance at the scene. Luckily, our sergeant wasn’t in his vehicle at the time and was unharmed, as were the occupants of the ambulance. The driver of the Tesla sustained non-life-threatening injuries and was transported to a hospital."

Shortly after the initial post, Arisona Public Safety added this important tidbit of information: "We can confirm the driver indicated to troopers the Tesla was on autopilot at the time of the collision." There is no word yet whether this particular Tesla was equipped with Tesla's newest "Full Self-Crashing" technology.

Police say that the 23-year old California resident who occupied the Tesla during the crash will be evaluated for driving under the influence. Or perhaps more accurately, being driven in a Tesla operated by Autopilot while under the influence of alcohol.

For a partial list of the many previous crashes Tesla's operating on Autopilot have caused, please see the below clippings list.

January 2020: Second Crash In One Month Of A Tesla Into A Parked Firetruck Results In Fatality
December 2019: Tesla Model 3 On Autopilot Hits Yet Another Police Vehicle - Why Won't They Stop?
August 2018: Third Tesla Crashes Into Back of Firetruck - That's Four Crashes Into Emergency Vehicles This Year
May 2018: Another Tesla On Autopilot Hits Another Emergency Vehicle - You Can't Make This Stuff Up
January 2018: Tesla Police Blotter News - Tesla Driver Hits Parked Firetruck - Blames Autopilot

Timothy Parker wrote on July 16, 2020 - 12:57pm Permalink
Clearly, the Tesla driver is negligent and should be appropriately charged. These "assist" features do not relieve the driver of safely operating the vehicle. Tesla could add a camera to monitor the driver's attentiveness and either turn off autopilot or stop the car when the driver is not actively controlling or monitoring the car. Without those safeguards, Tesla itself should be held accountable for product liability.

Tesla-Funded Research Reveals One of The Biggest Mysteries of EV Battery
Tesla Tesla Buyer Nets a Whopping $12,000 Discount After Asking for Reduction
END_OF_DOCUMENT_TOKEN_TO_BE_REPLACED