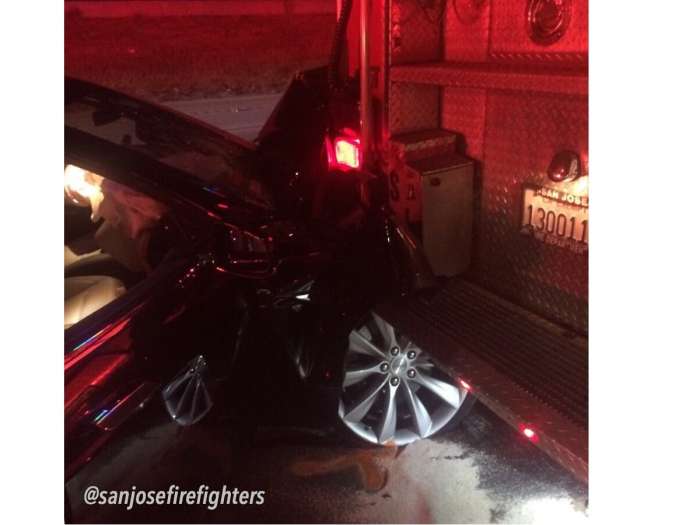 Another Tesla Model S crashes into the back of yet another emergency vehicle.
Advertisement

Another Tesla has slammed at full speed into the back of yet another firetruck. If this story sounds familiar, it is because this is the third firetruck a Tesla has crashed into just this year. The first notable crash of a Tesla on Autopilot was a fatality in which the Model S hit the side of a tractor-trailer. A Tesla also slammed into a highway barrier and yet another crashed into the back of a police SUV stopped at a construction site. Apparently, Tesla has not been able to design a safety system that will see this stationary objects and help prevent the cars, which can cost up to $140,000, from impacting them. 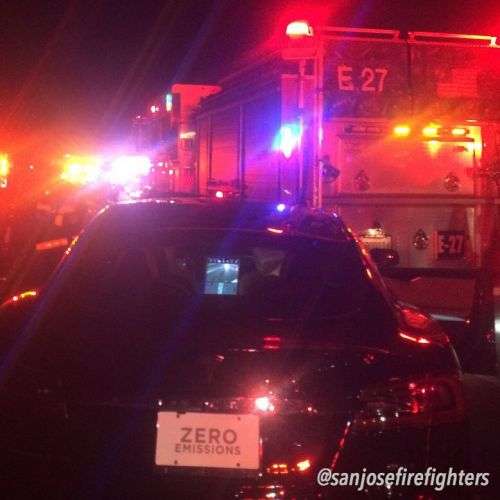 Were the Tesla (Model S and Model X) a routine, run of the mill affordable car, it would seem fair to ask why the media covers these crashes so carefully. Or why the first responders post the details of the crashes on their Facebook and Twitter pages. After all, crashes occur daily. However, the Tesla Model S and Model X are not typical cars. The company's CEO has often bragged that the Model S is the world's safest car. Many are equipped with Level 2 autonomous driving technology Tesla calls "Autopilot."

In the previous rear-ending crashes drivers and the company confirmed that the partial self-driving system was operating. In this crash, what we know so far is what has been reported by the San Jose Fire Department. They wrote:
"TESLA near miss! For the second time in recent months San Jose Fire Fighters narrowly escaped serious injury. This time a @teslamotors “Zero Emissions” vehicle slammed into the back of a SJFD Fire Engine at 70 MPH on Hwy 101 . . . . We can’t confirm if the driver had the vehicle in auto mode but clearly the vehicle did not stop in time. The driver also was reportedly under the influence of alcohol. Firefighters from Engine 27 (Bernal Rd.) had just arrived to a vehicle accident on the freeway at 1am near Coyote Creek and were just about to get off the apparatus when struck. The driver of the vehicle escaped serious injury."

Amazingly, only Tesla drivers have been killed and injured in these rear-end crashes so far. The first responders continue to dodge a Tesla bullet (thankfully).

Earlier this year Torque News asked MIT Research Scientist, Bryan Reimer, Ph.D why Tesla vehicles continue to crash into emergency vehicles. Dr. Reimer has been involved with a long-term study of Tesla'a Autopilot system's safety. Dr. Reimer replied, "We know there is an issue with the detection of static objects." He went on to add that Tesla needs to "Stop this nonsense." Apparently, Tesla hasn't. You can watch and hear our exchange with Dr. Reimer at the MIT symposium on autonomous vehicle technologies in the video below. Timestamp 1:26:20.

Tesla plans to release its newest Autopilot update this week. EV-advocacy publication Elektrek says the new version "...sounds a lot like a level 3 autonomous driving system, which would mean that the version 9.0 software update could push Autopilot up by one level for owners of Autopilot 2.0 cars with the Enhanced Autopilot package."

Jacqueline Ferrara wrote on August 28, 2018 - 3:48am Permalink
Yeah... but zero emissions!
DeanMcManis wrote on September 3, 2018 - 8:42pm Permalink
With fires all around I am happy to get such great support from our California Firefighters. But their giant fire trucks can be out in the road nearly anywhere that is needed to battle the blazes. Although no news stories are covering it, there are probably 10 times as many accidents with human drivers running into emergency vehicles during this same time period. Even though there is a learning period with any developing technology I am glad to see that Tesla has been taking the lead with automated driving. I am certain that there were similar problems with the development and use of safety belts, air bags, cruise control, traction control, anti-lock brakes and other safety systems that are now part of every new car sold today.