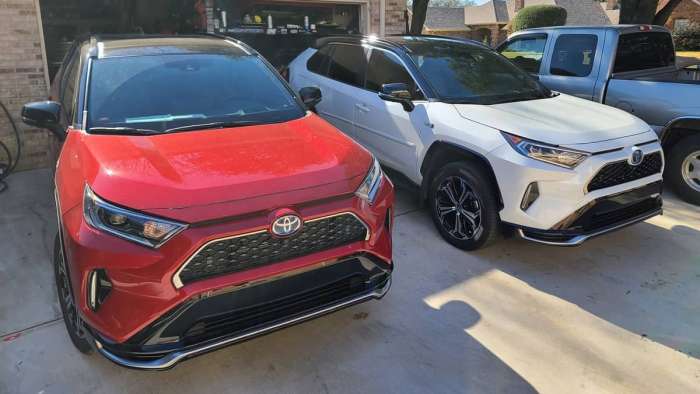 The Toyota RAV4 Prime is one of the top-selling EVs in America. Now owners are adding second ones to their driveways.
Advertisement

Many affordable electric vehicle crossovers are selling in relatively low volumes. One that leads the pack in terms of deliveries is the Toyota RAV4 Prime plug-in hybrid-electric vehicle (PHEV). It “outsold,” other hot EV models like the Ford Mustang Mach-E and Volkswagen ID.4 battery-electric crossovers in 2021. Toyota’s ability to make the RAV4 Prime is really what set it at the top of the 2021 delivery list. Almost every vehicle model in America today is limited not by popularity, but by production capability. Toyota’s ability to overcome adversity in its production is now enabling a new trend. RAV4 Prime owners are buying second ones.

We first noticed this trend on social media. Owners of RAV4 Prime PHEVs were posting up images like the one at the top of our page courtesy of Chad Dunn. He’s a bit unusual in that he owned three RAV4 Primes at one time. He tells us he is “Now down to two.” Another Toyota owner we communicated with has two RAV4 Hybrids and a RAV4 Prime.

Flexibility may be one reason that owners of RAV4 Primes are opting for another rather than a battery-electric vehicle. The RAV4 Prime can travel to and from work for most commuters using only electricity. However, when a road trip beacons, it can travel for between 450 and 600 miles on one full gulp of energy. Stop for a few moments and the RAV4 Prime can gain another 400+ miles of range and never need to charge. When operating as a hybrid-electric vehicle the RAV4 Prime returns about 38 MPG according to the EPA. In our week of testing, it averaged 46 MPG when operating as a hybrid.

The RAV4 Prime is also easy to charge overnight at home using 115 V power. No special charging station is needed at home. Plug it in when you return from work, and by morning around 42 miles of EV range await. Many owners report going months without buying gasoline.

Unlike many battery-electric and plug-in hybrid vehicles in its price range, the RAV4 Prime comes standard with all-wheel drive, has a spare tire, and can tow. That makes it more of a true “utility vehicle” than some of its peers like the Ford Escape PHEV, Chevy Bolt EUV, and Volkswagen ID.4.

Like the Tesla owners that opted for a RAV4 Prime, owners of the Toyota are discovering that it can fill so many roles it works as not just a primary, but also secondary family vehicle.

Jeffrey Morse wrote on March 4, 2022 - 10:31am Permalink
This is exactly the kind of vehicle that should be encouraging. It would cut way down on gas use and doesn't require a completely different infrastructure like EV charging stations. Plus its much more convenient.
Vince Caruso wrote on March 6, 2022 - 9:03pm Permalink
Not owning a second car for trips can save a huge amount of carbon emissions. We have Prius Prime and rarely stop to get gas except going on trips. So we only need one car.
Paul Weber wrote on March 7, 2022 - 4:10pm Permalink
Do you know of any Toyota dealerships that are not surcharge above MSRP? I’m interested but not an thousands of dollars over sticker.