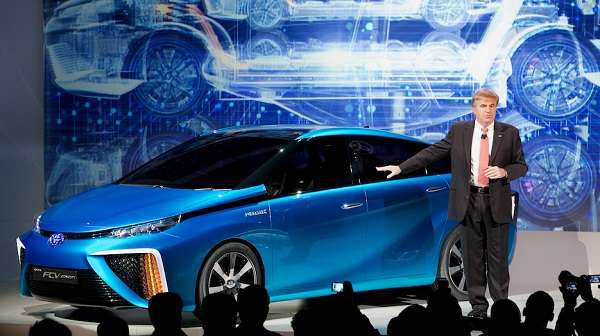 Toyota is stepping up to help the state of California and a hydrogen supplier build 100 hydrogen fuel cell vehicle fueling stations.
Advertisement

This May first the California Energy Commission (CEC) granted FirstElement $200 million through its Notice of Proposed Awards (NOPA) process. The grant is intended to provide funding for 100 hydrogen stations. The award is expected to be approved in June. As a result of this grant, Toyota is also committing money and resources to support the project.

For those readers that have not followed electric vehicle development, Toyota has basically bowed out. It does make a California compliance RAV4 EV, but limits its production to the state and builds only what it must. This should not be seen as any lack of interest on Toyota’s part to save fuel. Toyota’s hybrids outsell the entire EV industry each month by a huge margin and represent more than half of the hybrids sold in North America. The fuel saved by Toyota’s hybrids is greater than that saved by all of the EVs combined. Toyota's Plug-in Prius is also one of the top electrified vehicles in terms of North American sales, and was number two in sales this past month to the Leaf.

Instead of battery electric cars like the BMW i3, Toyota has gone forward with the development of electric vehicles that have an on-board fuel cell. The fuel cell uses hydrogen to generate electricity and power the vehicle. There are no harmful tailpipe emissions. At this year’s Consumer Electronics Show Toyota displayed a Fuel Cell vehicle it plans to market in 2015. Toyota is already tailoring its marketing to highlight the challenges electric vehicles face and highlight the abilities of its fuel cell and hybrid cars.

Toyota Motor Sales’ senior vice president of Automotive Operations, Bob Carter, commented on the new role Toyota will play in helping to build the infrastructure to support hydrogen fuel cell powered cars. In a statement he said “The first few years here in California will be a critical period for hydrogen fuel cell technology,” said Carter. “California has stepped up with the offer to invest $200 million dollars to build 100 stations, and through this financial arrangement with FirstElement, Toyota is showing its full commitment to deploy zero emission fuel cell vehicles here in California. Perhaps most importantly, we are showing the future owners of this amazing technology that Toyota is helping to ensure that hydrogen refueling will be available, no matter what car brand is on the hood.” That last statement may be a reference to Tesla, which builds EV charging stations that only its vehicles are allowed to use.

Interestingly, many electric vehicle advocates, owners, and fans are openly hostile to the idea of electric vehicles powered by on-board fuel cells. Forums and clubs frequented by EV advocates clearly show a disdain for this technology, which achieves most or all of the primary goals that conventional EVs do, but in a different way.

mike w wrote on May 9, 2014 - 10:13pm Permalink
So these refueling stations cost $ 2 million each? And a Tesla supercharger station is rumored to cost $150,000 and a D.C. fast charger cost what $30,000. This hydrogen fuel cell thing sounds expensive. Infrastructure for electric sounds way cheaper.
Parks McCants wrote on May 10, 2014 - 4:18pm Permalink
True enough Mike. But you may wish to step back and take a look at the broader implications of fuel-cell technology. The current high efficiency fuel cell stack, as developed by Honda, is 1/3 the size of earlier generations, has been applied to truck and motorcycle applications and has subsequently reduced the required size of the vehicle's battery pack. Oh, and then there's that " grid" thing . While nothing's free on planet Earth, Hydrogen can be derived from bio-mass, you know, garbage dump. derived methane. I believe EV and FCEV to be viable candidates for zero-emissions personal transportation in the near future. There's a place for both technologies.
John Goreham wrote on May 13, 2014 - 9:49am Permalink
I'm with Parks. Also, imagine this; A plug-in hybrid Fuel Cell vehicle with a small (2 mile) battery. All the benefits of nighttime almost free charging, regenerative energy from braking, the instant torque of a battery EV. Use the battery just upon starts from dead stop. Hard to imagine a greener vehicle with great range. Cost? Since we are not trying to add range from the battery, maybe a cheaper nickel metal style battery. We know they work. Make the battery ONLY use 115 volt 10 amp lines. No need for re-wiring in the house.
Parks McCants wrote on May 13, 2014 - 1:49pm Permalink
Love this idea John. That's the future...