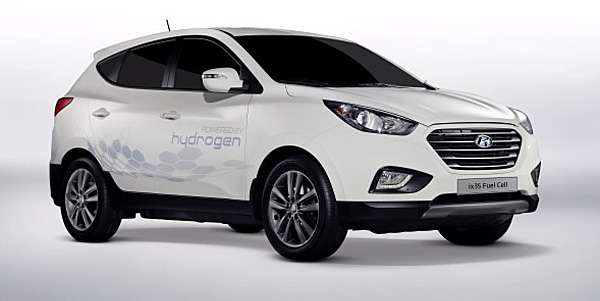 Hyundai has seen the future and it's fuel-cell powered vehicles. That's according to Hyundai Motor America CEO John Krafcik who made the announcement today at the company's technical center in Michigan.
Advertisement

Each year before the Los Angeles Auto Show, Hyundai invites media from the East to its technical center that it shares with Kia to promote what's coming to the Los Angeles Auto Show. Typically the information has an embargo until the day of the show but Reuters has released that Krafcik has unveiled plans for a Hyundai Tucson with a fuel-cell powertrain.

According to the Reuters article, "The South Korea automaker is expected to unveil the Tucson fuel-cell vehicle, which is already sold in Europe as the ix35, next week at the Los Angeles auto show." That news conference will be held 4 p.m., Wednesday, Nov. 20 at the Staples Center in Los Angeles.

The fuel cell vehicle is going to be a bit of a gamble for Hyundai – but this is a company under Krafcik's leadership that has largely been holding some great hole cards for the last few years. Except for problems last year with overstating fuel economy, Hyundai has a pretty good reputation in the United States for its products and innovations.

Krafcik said Hyundai will make 1000 Tucson fuel cell vehicles for the United States market until it can be determined what interest is. He didn't elaborate if the vehicles will be sold outright to the customers or leased as Honda does with its fuel cell vehicles.

UPDATE: Hyundai spokesman Derek Joyce sent along this note, "One fact we’d like to request correction for is we’ve made no sales projection for the U.S. market. We will offer a lease; no retail sales at this time. Hyundai can build up to 1,000 units globally through 2015. Exact volumes will determined by global demand requirements through that time period." The lease information was correct in a later story on Five Facts About the Hyundai Tucson Fuel Cell Vehicle.

Hyundai's sister company, Kia, is itself focusing on a Kia Soul Electric Vehicle that debuts in the United States 2014. It is promising to deliver 120 miles on a single charge but the Soul EV range is being disputed by an expert.

As reported back in February, "Hyundai plans to use these initial sales to begin lowering production costs and raising economies of scale for FCVs, giving them a leg up on most other automakers who will not be rolling out fuel cell vehicles until 2015 or beyond. Hyundai hopes to aggressively carve their name into the market in much the same way Toyota did with the Prius.

"The Hyundai ix35 Fuel Cell performs with similar characteristics to its gasoline counterpart, with a 0-60 mph time of about 12 seconds and a range of about 594 kilometers per tank fill. It has a lower center of gravity, due to the fuel cell stacks, storage tanks, and small battery being centrally-placed in the SUV, and has zero emissions at the tailpipe. Hyundai has been developing the ix35 for fourteen years and has put more than 2 million road test miles on the prototypes throughout Europe, Korea, and the U.S."

bruce dp wrote on November 16, 2013 - 11:57pm Permalink
FCVS make money for Oil and Auto companies. The hydrogen (h2) is not going to be made from renewable sources as touted, it is going to be made the cheapest way possible so Oil company profits are highest: it will most likely be made from natural gas, methane, ch4. And no one is talking about the disposal of the gunk left over after the reforming/extraction. H2 prices are going to climb right along with petroleum prices. The price of the ch4 the U.S. imports is going up, and up. See http://www.eia.gov/dnav/ng/ng_move_impc_s1_m.htm FCVS is not a solution. They are being promoted by the companies that will profit: Oil and Auto. Either stay with a high MPGe fuel car or see if an EV or plugin hybrid will suit your needs.
Frank wrote on November 19, 2013 - 8:58pm Permalink
Article is good, but I don't agree with the title. Since when is a fuel-cell vehicle not an electric car?