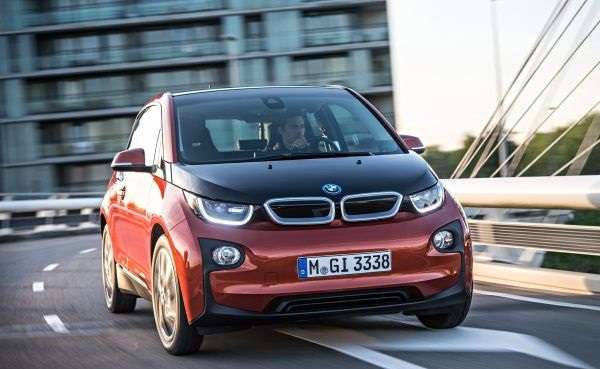 Driving impressions of the new BMW i3 electric vehicle

BMW has created its own space in the EV market in terms of price and content, but does this car actually drive and feel like a BMW? The answer is interesting.
Advertisement

Drive the new BMW i3 for less than a mile and you will understand why the car has a great chance to sell in whatever numbers BMW wants to make it in. Having driven and written about the BMW Active e, Tesla Model S, Honda Fit EV, and Nissan Leaf, I know and understand that EVs need to balance acceleration, cost, range and other factors. Unlike a gasoline powered car, EVs cannot have it all, even with massive financial support from you, the taxpayer. BMW has tipped the scales in an interesting way this author thinks will work.

Unlike the Honda Fit EV and Nissan Leaf, this new BMW i3 accelerates smartly from a stop, and keeps on accelerating if the driver wants it to. BMW is always conservative with performance numbers, but says the car will go from 0-60 in 7.2 seconds. It feels faster. In my opinion, BMW gave this car exactly the right amount of power. It has less dramatic acceleration than a Tesla Model S, but who cares? The Model S in its most commonly purchased form is more car than anyone really needs on public roads. The BMW i3 does not pretend to be more than a great passenger car. On the highway, where torque is the secondary factor to power, the i3 still has the pickup one needs to feel as if they are driving a premium automobile with guts. While on on-ramps it has much more pickup than you will need, and even better, it has as much as you will actually want.

I liked how the car steered. It is light in your hands (like a car with lots of power steering “boost”). The steering is laser sharp around town and on the highway. It is very direct. Let’s remember that this is a passenger car, not a sports car. If you accept that, as the vast majority of real-life drivers do, then this car handles well. I won’t comment on how it feels “at the limit.” People don’t drive passenger cars “at the limit.” I did not perform any emergency maneuvers but it sure felt like it would do fine, and a whole lot better than any truck, SUV, or large affordable car would.

The suspension is OK. I’d give it a B. It seems to handle bumps OK, but it was more harsh than I would expect a luxury car to be. Bumps that it was not able to absorb well rattled the structure more than I like. There is no B pillar in this car. The two side doors open opposite ways and the car is open like a clam shell when both are open. I swear I heard the door rattle over one set of bumps that were typical for this area (Northeast). Try it yourself and decide. One thing is for sure, it is not the mushy bland econobox feel of a Leaf, and it sure as heck is not sport-lux like a Tesla Model S. It is nicely in between.

Most EVs use the “one pedal” driving style. This means when you lift off the accelerator the car slows dramatically. I am not bothered by it. Some may be. You decide. The upside of this is that when you lift, you put energy into the battery. When I used the brakes they felt solid and I liked the pedal feel.

One thing that did bother me a little was the A pillar. Due to the car’s structure it is way out in front of you and seems very thick. It was in my line of sight at intersections and when I turned the car. I found myself trying to look around it. This cannot be helped given the i3’s odd boxy design. I loved the seating position in general, but like the BMW X1 I drove recently, I am too big a human for the seat. I am 6 feet and 195 pounds. If you are smaller this may not be a problem for you. To add some perspective, I tested the Mazda3 last week and it fit me great. It is rare I find myself too big for a car.

To me this car is not at all what I think of as a BMW. The one thing BMW has left now after moving away from perfect small sedans with silky-smooth, in-line 6-cylinder, normally aspirated engines, is that unique solidity. All that unites BMWs now in my mind is that special German “solid as a rock” feel. This BMW does not have that. The only thing I can come up with for you that makes this car “a BMW” is its price point. It has none of the same character, none of that special something that all BMWs present to you when you drive them. It is its own thing. Not a bad thing mind you.

This is a driving impressions review so I will not offer my thoughts or opinions about the i3 in other ways such as safety, looks, value, quality, expected reliability, green credentials, etc. However, I do have to comment on the complete lack of a spare tire. The car uses tires the likes of which you have not seen on a car before now. Very tall, very narrow (see photo), and they are not run-flats. Due to where I live, on the roads I travel, I will not buy a passenger car without a spare of some kind. These completely unique BMW i3 tires will not be in stock anyplace local, with the possible exception of a BMW dealership (maybe). You have been warned.

Before any taxpayer money is given back to you, a base i3 starts at about $41k. That gets you a car with no back-up camera and lots of stuff missing you might expect at that price point. A loaded i3 with range extender runs about $53K. Like Nissan, BMW has a lease program that seems inviting. The BMW sales representative I spoke to says that orders are being taken now, inventory is near zero, and cars are likely to start arriving in June. He did not know for certain, but he thought that BMW would at some future point expect dealerships to stock i3s on their floors. I would not expect that to be any time in 2014.

I drove this car at a public event hosted by BMW. There were throngs of EV and BMW fans in attendance, and some were simply dying to have an i3. Once it gets established in its supply chain, and if BMW wants to produce this vehicle to meet customer demand, I will be shocked if it cannot outsell both the Leaf and Tesla Model S. This is the only practically sized electric car in the US market that actually drives in a way I can call acceptable and enjoyable, other than the two or three times more expensive Tesla Model S.

Related Stories:
BMW i3 increases production to meet high demand, will double 2014 projections
The EPA Range of the BMW i3: A Prognosis