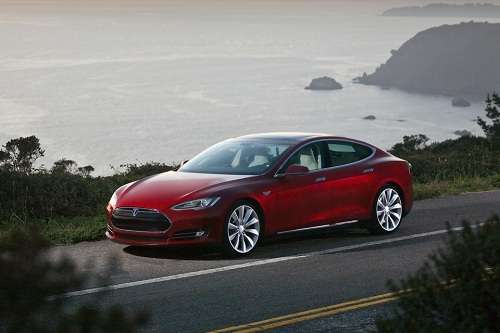 Having dropped the entry level Model S, Tesla will now provide a more range-capable car, but limit the range with a software lock.
Advertisement

Tesla’s 2014 Model S super-sedan was to begin the model line-up as a limited range 40 kilo Watt-hour (kWh) battery car. However, in an odd move, Tesla has cancelled that model. In a strange twist on the electric car saga it will now sell those customers that had ordered a 40 kWh Model S, the upgraded 60 kWh version. However, it will artificially reduce the driving range of the vehicle to what the never produced 40 kWh car would have achieved.

Tesla has been either doing very well lately, or doing very poorly lately depending on one’s viewpoint. On the plus side, founder Elon Musk is promising some big news tomorrow. Also, the company is frequently providing press releases that indicate the company has been able to ramp up production and is now producing cars at a rate it is more than satisfied with. Late yesterday the company announced proudly that customers who are taking delivery are seeing that the VIN of their vehicle indicates that sales have exceeded 4,750 units. Tesla did not say if that number is deliveries for 2013 or if that is the running total of all Tesla Model S sedans ever. For more on the company's recent financial results please see the TN story by David Herron here. As of last year, the company had delivered less than 3,000 model S cars to customers. Its original goal had been to sell 5,00 by the end of 2012. In related news the company indicated it would be paying loans provided to it by the US taxpayers care of the Dept. of Energy off sooner than required.

The Model S was to be a line of cars just like any automaker builds. There were to be entry level models that were to have started in the upper $50K range. The plan was to build more powerful and also more range-equipped models that would have prices rising up into the approximately $115K range. This serves two purposes. First, it allows those who do not need or want the fastest performance to pay less and still own a Tesla. Second, in a reversal of the way many manufacturers market their products Tesla could advertise and issue marketing information saying “Starting at $50K” and then provide test cars to magazines and other media outlets that had significantly more content. The twist is that most manufacturers sell many, many more of their cars in the lower specification range. Tesla appears to be targeting most of its customers sales with the more capable Model S cars.

In company statement Tesla explained what it will do now that it has cancelled the 40 kWh car saying; “The customers who ordered this option will instead receive the 60 kWh pack, but range will be software limited to 40 kWh. It will still have the improved acceleration and top speed of the bigger pack, so will be a better product than originally ordered, and can be upgraded to the range of the 60 kWh upon request by the original or a future owner.” Thus, instead of offering the 4 percent of customers that chose the 40 kWh a more capable car at the same price as the 60 kWh vehicle, they will be provided a car that has more range than it is allowed to access. Tesla could have offered the customers a fully capable 60 kWh car, but then what about those who bought the 60kWh car? They would certainly have felt slighted. The reason this is so strange is that car companies, electric utilities, higher education institutions, and governments world-wide are struggling with the issue of electric car range. Here Tesla is selling a car that could go further, but is limiting the range artificially.

Will a hacker learn how to unleash that extra power and offer that code upgrade in violation of the Tesla warranty? Will customers simply accept that they have a car that could go further, but is not allowed to? Not likely. Most likely the 4 percent of customers that had ordered the weakest Model S will pay a bit more and happy they did so when they are approaching a Supercharger station showing less than 5% power remaining. Tesla also noted that in an upgrade, its 60 kWh cars will now be shipped compatible with its own charging stations (called Superchargers). Previously, Tesla had planned to deliver cars that were not compatible with this proprietary charging service unless customers paid for an upgrade.

PJS wrote on April 1, 2013 - 8:53pm Permalink
Looks like they may make 20k production despite the naysayers...
John Goreham wrote on April 2, 2013 - 7:18am Permalink
They certainly say (imply so). Big announcement from Tesla today 5pm EST.
Aaron Turpen wrote on April 2, 2013 - 3:48pm Permalink
The reasoning behind this is obvious: 1) customers aren't generally buying the 40kw model, 2) it requires a refit of the production line to produce each of the three models (which costs money), 3) their markup is so high that selling the lower-end model and software-limiting it is cheap. Tesla might make their 20k production goal, but I'm still not holding my breath.