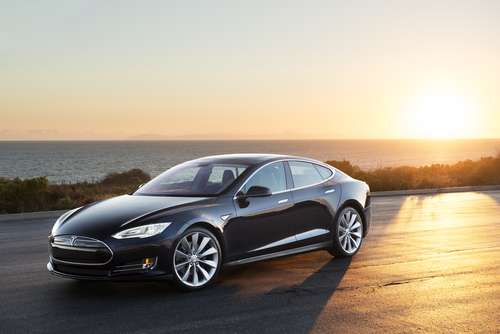 On Thursday, Tesla Motors released their fiscal year 2012 SEC filing, after having to delay that report after accountants discovered errors in presenting financial results dating back a couple years. Tesla's 2012 10-K filing shows Tesla more than doubled its revenue between 2011 and 2012, thanks to sales of the Model S, while also running a massive loss, thanks largely to building out the factory. In the filing management reiterates they expect to reach profitability in 2013.

On Monday the company filed a notice with the SEC saying they were unable to file the 10-K on time because of "a probable error in the presentation of certain non-cash items relating to capital expenditures on its consolidated statements of cash flows." Along with the 10-K filed today, Tesla filed another document with the SEC explaining further the problems with Tesla's prior SEC filings. That filing said that the consolidated statements of cash flows in quarterly filings during 2012 should not be trusted because of the aforementioned error. The explanation is that some purchases of equipment were "erroneously included as cash outflows from investing activities and cash inflows from operating activities." Essentially the numbers were put in the wrong column, causing some numbers to be incorrect while not affecting the final outcome. The filing reiterated this had no impact on "previously reported total cash and cash equivalents, consolidated income statements, consolidated balance sheets, or free cash flows."

Tesla's automotive sales in 2012 were $386 million up from $149 million in 2011, and total revenues was $413 million up from $204 million. This is the result of manufacturing 3,100 Model S's of which 2,650 were sold to customers. The company also earned revenue from component sales and development services to Daimler and Toyota, for both of whom Tesla is either designing or manufacturing electric vehicle components.

During 2012 Tesla Motors had to spend a massive amount of money building out their factory in Fremont CA, as well as building new stores around the country, hiring and training workers and more. Capital expenditures in 2012 were $239.2 million, up from $184.2 million for 2011.

Tesla ended 2012 with $221.0 million in cash and cash equivalents, and had fully tapped the Dept. of Energy loan program. While this amount of cash is less than their 2012 loss, management believes their cash position is sufficient to fund the company until it becomes profitable later in 2013. In other words, Tesla's management believes the company will be able to essentially turn on a dime from a condition of suffering steep losses to becoming profitable.

The claim rests on the fact of reaching the production rate of 20,000 Model S's per year. The company reached that milestone production rate during December, and has been able to maintain it since. All through 2012 Elon Musk claimed that Tesla would be cash flow positive on sales of just 8,000 Model S's per year. The big question mark is just how long Tesla can maintain sales of a luxury electric car, or will the customers dry up after awhile.

The Dept. of Energy loan program was slated to assist Tesla with R&D of the Model S, and building the factory to manufacture that car. Tesla tapped the last dollar of that program in 2012 and also started repayments with a $12 million amount recorded in 2012.

One item which could be a major cost for Tesla is the Supercharger network. The Supercharger's allow a Tesla Model S owner to get a 50% recharge (130+ miles of range) in 1/2 hour, and a full recharge within an hour or so. Tesla has built a few Superchargers on the West and East Coast's and has an extensive plan to build out a nation-wide network. Further, the Superchargers are free to use giving Model S owners the prospect of free coast-to-coast travel, with Tesla footing the electricity bill.

The SEC filing makes it clear Tesla see's the Supercharger network as an enticement for Model S sales. The company is planning additional Supercharger installations during 2013 starting first with the coastal areas. The big question is what is this costing Tesla to build, and will there be big unforeseen operational costs down the road. The SEC filing does not break out these costs, either for building the Supercharger network or for supplying electricity. It does admit risks that there could be unforeseen costs operating the network, or that they might be unable to build the network quickly enough due to an inability to line up locations.

What does all this mean for Tesla as a business? The filing claims Tesla will be "profitable in the first quarter of 2013 and experience breakeven cash flow from operations." How can Tesla go from incurring massive losses to being profitable so quickly? The same paragraph attributes this to "combination of improved gross margin, lower research and development expenses, as well as measured spending to support the expansion of our sales and service infrastructure and the general growth of the business."

John Goreham wrote on March 8, 2013 - 10:36am Permalink
Where did you get the information that the company has built 20,000 cars per year rate (400 each week) since reaching that milestone in December? That means there are now at least 7,100 Model S sedans built, right? and by the end of Q1 Tesla will have produced 8,500 Model S sedans. That is huge news. If true, and if they all sell, Tesla will have really made a huge milestone.
David Herron wrote on March 8, 2013 - 4:07pm Permalink
That information is from Tesla's published materials and statements from Tesla management over the last two months. I've covered this several times over. It was stated in the 10-K as well as the "Letter To Shareholders" released in February. And yes it is big news so I wonder why it's not getting more coverage?