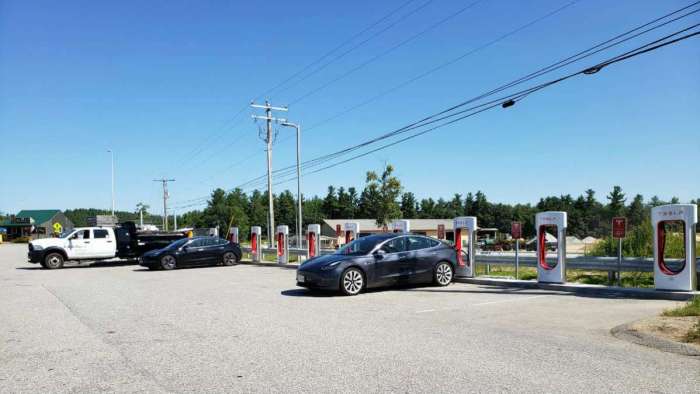 Tesla is seeing sales of the Model S and Model X decline by roughly 50%. Will adding back a feature help?
Advertisement

When Tesla first began sales of its luxury/performance Model S sedan and subsequent Model X minivan/crossovers, it offered buyers a perq that made them feel quite special and also helped to justify the cost of the vehicles compared to internal combustion engine-equipped (ICE) competitors. Tesla told buyers and the world proudly that the company would include free charging at its captive charging stations called Superchargers. It was a very popular feature among Tesla fans and buyers.

Tesla Losses Lead To Supercharger Changes
Eventually, Tesla lost money for dozens of quarters in a row and realized that offering free power to everyone forever was not feasible. So, the company created a second class of Tesla owners whose new vehicles did not come with the free service. They would instead pay a reasonable fee to charge. Out of the goodness of its heart, Tesla did agree to honor the promise for prior owners.

Model S and Model X Delivery History
For a couple of years, the Tesla Model S and Model X vehicles sold extremely well by comparison to their peers in the broader segments they occupy (most of which use ICE drivetrains)*. Not at first, because Tesla couldn’t build them fast enough. However, once the Model S factory SNAFUS were sorted, and then sorted again when the X launched, Tesla began reliably delivering over 2,000 of each model per month. Tesla even had some months, typically at the end of quarters, when it shipped nearly 6,000 Model S cars in a single month (December 2016). Those days are now looked back on fondly by Tesla and its fans. In the past six months, Tesla has struggled to deliver 1,000 units of each vehicle per month. Still good for $100K-plus luxury vehicles, but from the high points and far from the past few year averages. 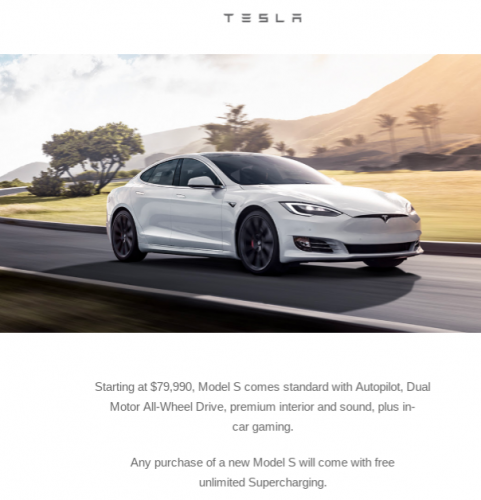 Tesla Brings Back Free Supercharging
To help push the pricey Model S and Model X vehicles, Tesla tweeted on August 3rd that the company was adding the free supercharging back to any new Model S or X. Today, Tesla sent an e-mail promotion to those on its mailing list with the offer (see above image). Those who bought a Model S or X when the second-class Tesla owners were taking delivery of the cars are not included as far as we can determine. The smaller, less expensive Model 3 is also not included.

Tesla Sales Promotions
This new sales promotion joins many other “dealer-like” sales efforts Tesla has recently begun to employ. In March of this year, Tesla was phoning shoppers on its “Stay up to date” list with offers of discounts on new, never driven cars including the Model 3. Your author received such an offer from Tesla in Dedham Mass. Tesla has also engaged in what Tesla-advocacy publication Elektrek calls “bait and switch.” Promoting a low-cost vehicle, only to then engage in assertive sales tactics to up-sell the interested buyer on a more costly trim.

We wish Tesla and both classes of owners much success with the new Supercharger sales promotion. Tesla needs volume deliveries of its high priced models to support its money-losing operations. Hopefully, the added sales will offset the higher legacy costs for free electricity. Reading over the many comments under Tesla's tweet leads us to believe that many Tesla owners and fans feel this is a negative move for the company. Tell us your thoughts in the comments below.

*Please note that all delivery data presented here relate to the U.S. market. Inside EVs offers a very comprehensive month-by-month listing of all Tesla models’ deliveries.

DeanMcManis wrote on August 7, 2019 - 3:43pm Permalink
It makes sense that Tesla would want to set up this free supercharging promotion for the their Model S and X vehicles. Since Tesla has the supercharger network already established, and the newer "Raven" models offer even more range at a lower price, it would be an easy task to simply include them into the group of the early S and X buyers who get free supercharging. The sales of the S and X models have naturally dropped due to the far less expensive Model S, and pre-orders for the Model Y taking part of their EV sales market. But all of the Tesla models together still comprised over half of the U.S. electrified vehicle sales in July, and that includes the successful Prius Prime and all other PHEVs and EVs combined.
Joni wrote on August 30, 2019 - 4:06am Permalink
Can yuu tell me the dates the free supercharging was offered for model x. I purchased a model x in June 2018 and was told by the salesman if I took delivery by the end of June (rather then order a custom built and waiting until August) I would get free supercharging. Never got the free charging. My account shows I get 400 every year. When I’m at a Tesla showroom and inquire of a salesperson they always say that yes I should have free supercharging. When I call support they tell me there isn’t free supercharging!! How do I get what was promised me?
Santhosh John wrote on August 15, 2020 - 6:00am Permalink
Same here. I am going to drop a complaint on this Hello Tesla, We are So tragically Upset , Sad and depressed during this pandemic season to hear that Tesla is no more keeping up the promise they Committed on Free Super charging when we ordered the Car. The one and only reason we got the Tesla Model X is for the free supercharging and the Tesla representatives promised us the same as we have ordered our Tesla before 10/1/2018 .It was never told to us by Tesla representatives nor in the order agreement (Attached) that you will be eligible for free super charging only if you make the delivery before 10/1/2020. We did ask theTesla Sale representatives over and over regarding the free Supercharging and they Promised us that we are eligible for this ,We also made sure this was recorded in the attached "Motor Vehicle order agreement". The attached order agreement clearly says that free supercharging is included . If I was told or was recorded in the order agreement that the free supercharging was not included we would never have made this purchase . Also I was receiving free supercharging Since the beginning till last few months back,And i was always under assumption free life supercharging was included or else i would have returned the Car within the return period.