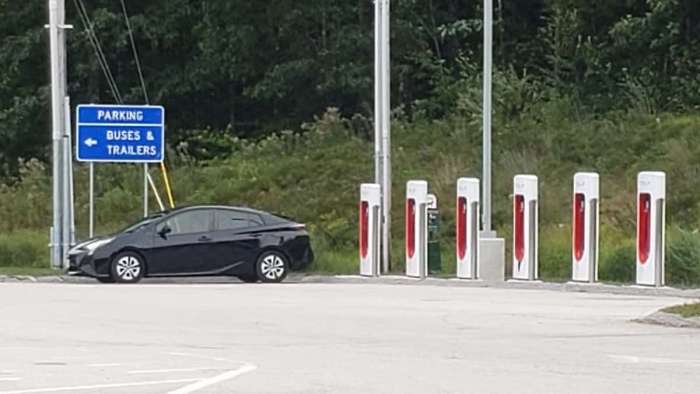 Since Tesla began hyping its Model3, the company has been a bit unclear as to whether the “affordable” compact sedan would enjoy the same unlimited Supercharger charging network benefits that its super-expensive ModelS and ModelX car owners enjoy. Today, the answer appears to be clarified, and it is a definitive “NO!”

On the company’s own blog, Tesla posted a message saying that “For Teslas ordered after January 1, 2017, 400 kWh of free Supercharging credits (roughly 1,000 miles) will be included annually so that all owners can continue to enjoy free Supercharging during travel. Beyond that, there will be a small fee to Supercharge which will be charged incrementally and cost less than the price of filling up a comparable gas car.” This creates two levels of Tesla owners; Those that have free, unlimited access to the Supercharger network, and those that do not.

Tesla is also hedging on what “a small fee” means. The blog goes on to say that “We will release the details of the program later this year, and while prices may fluctuate over time and vary regionally based on the cost of electricity, our Supercharger Network will never be a profit center.” In other words, if electricity becomes expensive, you will pay up – if you are a second-class Tesla owner. The first-class owner of the car next to yours at the Supercharger may be paying nothing.

The new blog post also clarified that Tesla does not consider its Supercharger network to be the primary way for owners to charge their vehicles. Anyone who has followed Tesla knows this, but the company wanted to emphasize that, “…we believe the best way to charge your car is either at home or at work, during the hours you’re not using it.”

Tesla says that it will reinvest the money that the second-class Tesla owners pay for charging back into its network. Read more about the new Tesla caste system here at the Tesla Blog.

John Goreham is a long-time New England Motor Press Association member and recovering engineer. John's interest in EVs goes back to 1990 when he designed the thermal control system for an EV battery as part of an academic team. After earning his mechanical engineering degree, John completed a marketing program at Northeastern University and worked with automotive component manufacturers, in the semiconductor industry, and biotech. In addition to Torque News, John's work has appeared in print in dozens of American newspapers and he provides reviews to many vehicle shopping sites. You can follow John on TikTok @ToknCars, on Twitter, and view his credentials at Linkedin

Tesla-Funded Research Reveals One of The Biggest Mysteries of EV Battery
Tesla Tesla Buyer Nets a Whopping $12,000 Discount After Asking for Reduction
END_OF_DOCUMENT_TOKEN_TO_BE_REPLACED