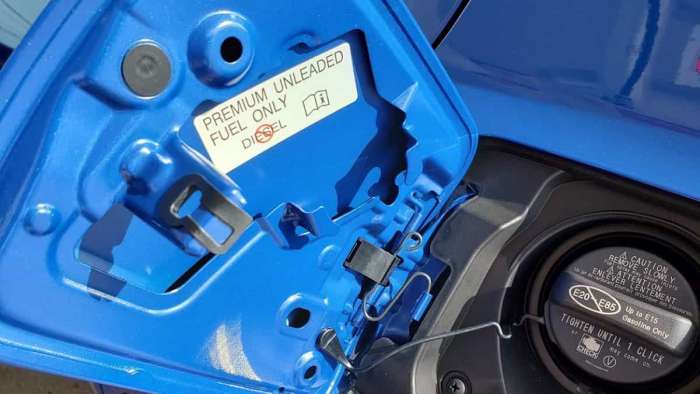 The Lexus IS 350 AWD comes with a massive cost penalty compared to the Tesla Model 3. Here’s how the math breaks down.
Advertisement

In the last quarter of sales, the Tesla Model 3 outsold the Lexus IS line by 25 to one. With just 3,629 units of IS cars sold, Lexus is not really in the same league compared to the 89,000 Tesla Model 3 cars Tesla sold. At least in terms of volume of deliveries. We just tested the newest IS, the IS 300 AWD and found it to be a very nice automobile. As a former owner of an IS 350C, any bias I have would likely tip toward the car I know and loved. However, one small decal caught my eye and got me thinking about doing some math. That decal was on the inside of the Premium Fuel filler door.

The Lexus IS 300 AWD needs Premium Fuel – ONLY! No low-priced, under-two-bucks gas for this special car. It needs the much more expensive Premium. We turned to www.FuelEconomy.gov to find out just how much more expensive the IS would be over its lifetime compared to the Tesla.

As it would happen, both the Tesla Model 3 Longe Range, Dual Motor, and the Lexus IS 300AWD have prices at just about $49K. So the initial purchase price is the same for the two. And that does not take into account any state incentives the Tesla might benefit from. With its electric drive, the Tesla is also likely to have a lower cost of maintenance and repair. However, we wanted to compare just the prices of the fuel. 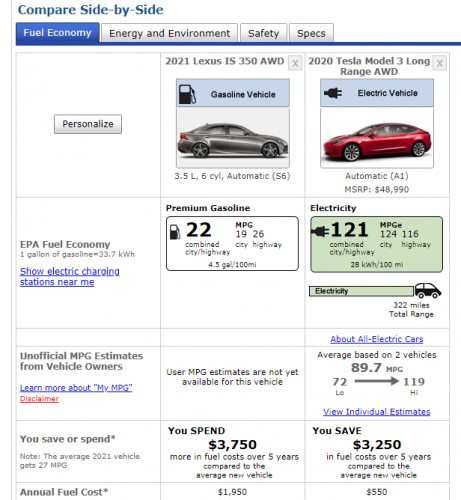 FuelEconomy.gov makes comparing the cost of energy for vehicles easy. We followed the prompts to compare the Lexus IS 350 AWD or IS 300 AWD (same fuel costs per year) to the Tesla Model 3 Long Range. The Lexus costs its owner $1,950 per year in energy. The Tesla just $550. So the annual difference is $1,400. Over the 20-year lifespan one can expect from a vehicle, that means that the Tesla has a $28,000 cost advantage over the Lexus. Were there a more fuel-efficient Lexus sports sedan offered in America with similar performance to the Model 3, we would compare it, but there is not. Lexus does not offer a green option for the IS line in this country, though it does sell a low power hybrid in other countries.

In 2013, both Car and Driver and Road and Track anointed the Lexus IS sedan best in class following a comprehensive comparison of the segment’s best cars. You know the BMW 3 Series name better because it was the car that once defined the segment. Either brand could now be selling 89,000 of these cars each quarter. Tesla has proven that the buying interest is there. However, neither kept pace with changing buyer priorities.

Hopefully, Lexus will adapt and soon offer a greener, more long-term cost-competitive sedan to the Model 3. We’d love to report on such a vehicle, perhaps named Lexus IS Prime, if Lexus does so.

Steve wrote on October 27, 2020 - 4:11pm Permalink
You are forgetting that Tesla computes the gas savings subtracts that from the actual cost of the car.
John Goreham wrote on October 28, 2020 - 8:05am Permalink
Thanks, Steve, but the $49K price I mention in the story is for a Tesla before the fuel savings are factored in. And I did add back the destination fee Tesla hides. Tesla does make it tricky, but you can back out the numbers if you are methodical.
Ron wrote on October 28, 2020 - 2:55pm Permalink
Tesla fans don't understand quality build, only battery power. Lets get that straight once and for all. I've never owned a Lexus I just know the difference. I just purchased a 2020 Bolt to try electric. Would not have looked at the Bolt other wise. If I didn't have a 911 I might be driving a Taycan but having a 911 could not get excited for a pricey electric. Now the Rivian is another interest as I have been on the waiting list for coming up on 2 years.