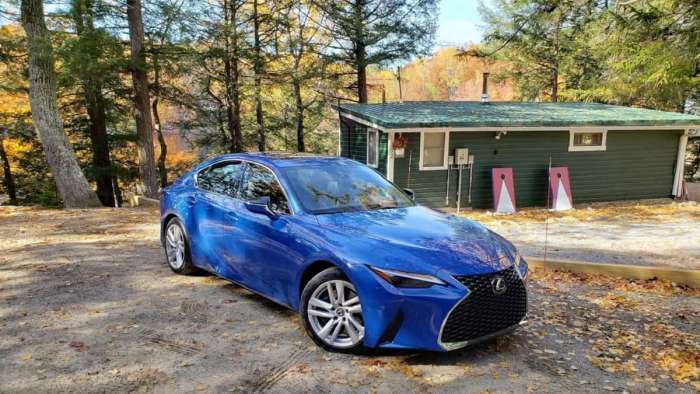 We test the 2021 Lexus IS 300 AWD sports sedan and find a familiar feeling in this updated grand tourer.
Advertisement

Lexus has made some changed to keep the IS sports sedan line current. We had a chance to check it out and drive New England back roads and mountain passes to see how well this familiar sports sedan handles in the best of conditions. Here are our findings. While reading, do know that the author is the former owner of a 2010 Lexus IS 350C.

2021 Lexus IS 300 AWD – What Does It Cost?
The Lexus IS line base trim starts at about $41K, but you won’t find many in stock at that price. Our tester cost precisely $49,000, including destination charges. That price included the Comfort package and what seems to be the standard Mark Levinson 17-speaker 1800-Watt premium audio system. Among the top-trim Genesis G70 AWD 3.3T Sport, TLX 3.5L SH-AWD PMC, Mercedes-Benz CLA250, Volvo S60 T5 R-Design AWD, Infiniti Q50 Red Sport 400 AWD, and BMW 330i xDrive we tested in 2020, the Lexus is by far the most affordable. It undercuts most of these vehicles by at least $4K, and is a priced a whopping $11K less than the Infiniti. Lexus includes no maintenance in this price, and the warranty is 4 yr/50,000 mi basic, and 6 yr/70,000 mi powertrain.

2021 Lexus IS 300 AWD – What Powers It?
The IS 300 AWD comes equipped with a 3.5-liter V6 (non-turbo) gasoline engine. It is rated at 260 hp and generates 236 lb-ft of torque. The transmission is a six-speed (yes, only six) automatic with paddle shifters. The vehicle has three drive modes. Normal, Eco, and Sport. We tried all three modes and found that they each have distinct personalities. We noticed that Eco meaningfully increases fuel economy on the highway and that Sport makes the transmission and throttle a bit better for sporty driving. Our fuel economy in mixed driving was 29 MPG.

For some reason, Lexus limits the output of the ‘300 IS sedans. The ‘350 has 311 hp. While 260 hp is certainly plenty to move one around, the IS 300 AWD is not a quick car by modern sports sedan standards. Lexus lists its 0-60 MPH time as 6.1 seconds. That is slower than a RAV4 Prime or Miata by about a half-second.

Due to the combination of an engine that needs revs to build torque, and a six-speed that needs to downshift in order to make those revs, quick bursts of speed like one can find in the Tesla Model 3, are just not possible. This sedan is more sedate and smooth than all of the sports sedans we have tested in the past year, and we have tested pretty much all of them.

2021 Lexus IS 300 AWD – The Drive
The IS 300 AWD is a smooth operator in all types of driving. We found that the car handled great. Back-roads driving in Sport Mode is rewarding and the steering is sharp. On the highway, the IS 300 tracks straight ahead and is nearly silent. The lane-keeping assist and adaptive cruise control work very well. On some dirt roads we tried, the IS 300 AWD surprised us. It is very smooth over such surfaces. The AWD system worked perfectly on loose surfaces and hills. No wheel slip was allowed by the car. Overall, the Lexus IS 300 AWD handled nearly as well as any of the higher-priced sports sedans we tested when we were having fun in the car, and was more serene when cruising than most. 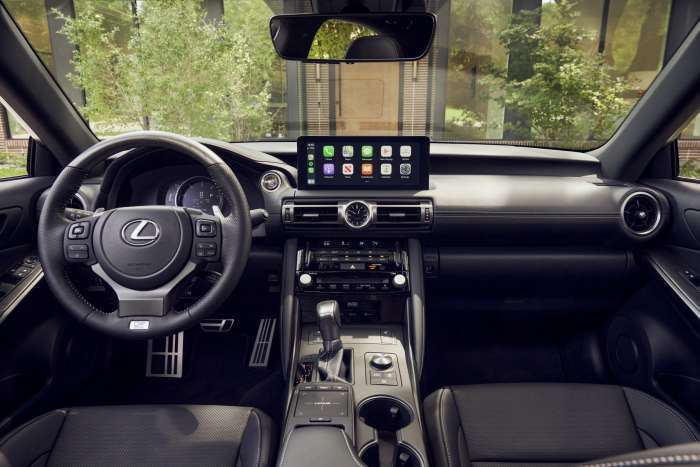 2021 Lexus IS 300 AWD – Infotainment and Content
Inside, the IS 300 AWD has changed since the second-generation IS was introduced in 2006. But not much. The dash is much busier now, and the infotainment setup is more modern. We used Android Auto and the apps like Google Maps, Pandora, and Waze with no difficulty, though the connection requires a cord in the Lexus, which is now wireless in some competitor’s vehicles.

Lexus still uses it frustrating and distracting touch-pad mouse system to control the infotainment screen; however, there is good news. You can also touch the screen to make it work. We stopped using the mouse pad after we discovered that.

There is no head-up display at this point, and the center gauge section is not very modern compared to other brands, which can show a map or other more graphical content.

Our Lexus had the synthetic Nuluxe seat material. We find it a decent substitute for leather. With both heating and ventilation, as well as a heated steering wheel, the content met our expectations for content in this regard.
The best interior feature was the Mark Levinson audio. It had a powerful bass and clarity at all frequencies. We found that it enhanced the premium feeling of this Lexus by a large amount. We would rank it along with the best audio systems we have tested.

One final plus from Lexus is the inclusion of a spare tire in the cargo area. A rare feature, and one you will not find in a Tesla.

2021 Lexus IS 300 AWD – Competitive Analysis
At this price point, Tesla’s Model 3, Long-Range with AWD and the Premium Interior (but not including FSD) is priced at about $50K. Factor in fuel savings, and the price is lower than the Lexus over time. While the two both have their advantages and disadvantages, the Model 3 absolutely dominates the sales of this segment and cannot be ignored.
The Genesis G70 is also hard to overlook with its more lengthy warranty coverage and a higher level of performance is also hard to overlook. With the Genesis now being ranked at the very top of quality rankings by J.D. Power, the brand is now occupying the space that once drew in a lot of customers to Lexus.

As a former owner of an IS from 11 model years back, it feels as if Lexus has let others bypass its IS line. For our suggestions on how this can be reversed, please see our related story titled “Lexus Badly Needs An IS Prime Sports Sedan."