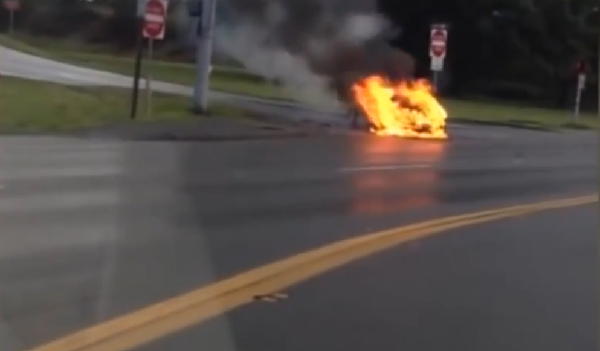 Tesla has fire fix - No you can’t download it

Tesla has come up with a solution to its Model S catching fire after hitting road debris. Unlike the previous idea, this one can’t be downloaded over the air.
Advertisement

NHTSA has concluded its investigation into Tesla’s Model S fires related to impacting road debris. As has been widely reported, the Model S had three fires. Two were directly applicable to the NHTS fire investigation. Those were caused by the Model S running over road debris, most notable a trailer hitch, and then catching fire. The third was an accident involving a Model S hitting and running up onto a wall. The battery packs were being pierced by these impacts and both NHTSA and Tesla sought a solution. One is now at hand.

Tesla has already changed the design of the Model S over the air. Those cars that could automatically lower their suspensions have been reprogrammed not to. This simply adds to the ground clearance of the car. The newly announced fix, sent out by Elon Musk along with a cool video you can view here, is old-school. Tesla will add a three-part skidplate to the Model S. New cars manufactured after March 6th will have the new design. Tesla will also add the new skidplate to existing customers' cars as they come in for routine service, or any time a customer wants it done, free of charge. This new change is part of the reason NHTSA can call off the investigation for now.

NHTSA has closed its investigation, but is hedging a little bit. It says of the investigation "Tesla's revision of vehicle ride height and addition of increased underbody protection should reduce both the frequency of underbody strikes and the resultant fire risk. A defect trend has not been identified. Accordingly, the investigation is closed. The closing of the investigation does not constitute a finding by NHTSA that a safety-related defect does not exist, and the agency reserves the right to take further action if warranted by new circumstances.”

The new skidplate has a bar in front that will try to redirect debris. The second level of defense is a titanium (adamantium was too expensive) shield over the already standard aluminum battery pack cover. The final part of the new assembly is an aluminum spar that helps the Model S jump up and over obstructions.

Tesla fans will no doubt be relieved a fix is now available. Based on our interaction with the Tesla owners and enthusiasts, it seems safe to say many will also be equally relieved that Tesla will not have to undergo a third formal “recall.” Recall is a word those Tesla fans are not at all fond of.

Still Image and video credits shown when video is viewed.

Luke Ottaway wrote on March 30, 2014 - 10:26pm Permalink
Appears to be a good fix. Might be on the expensive side for Tesla (adding titanium is never cheap) but judging by the videos it will pretty much eliminate the risk of the same incidents happening again. That concrete block was pulverized.