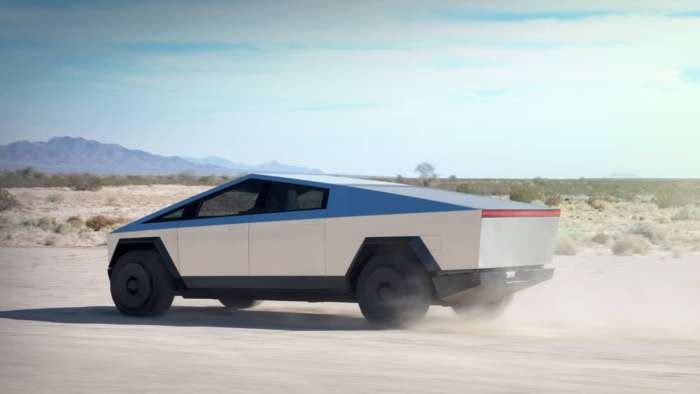 It was November of 2019, nearly two years ago, that Tesla held its launch event for the imaginary Cybertruck. Chief public relations officer for the company, Elon Musk, was the ringmaster. A cadre of minions dressed in black and wearing boots and long black jackets (in sunny California, indoors) was on hand to help demonstrate the awesomeness of this latest Tesla vehicle. What looked like a guillotine was on stage, and the highlight of the event was the chief minion throwing things at the Cybertruck to show off the bulletproof windows, which promptly shattered. It was all so promising, sad, and weird. Why the event was not held at Burning Man is the only real question.

When Was Cybertruck Launched?
The truck shown on stage in 2019 was a prototype, or mock-up, or possibly a hologram, and had not come from a production plant dedicated to the model. Wide-eyed lamestream media journalists and Tesla’s advocacy media partners covered the event as if it were a real launch for a real product. The implied promise was that this was a consumer product that could be purchased. Except it wasn’t. And still isn’t.

Related: Here is the definition of vaporware.

One top Tesla news publication, Elektrek, recently updated Cybertruck fans and investors by revealing that the Cybertruck may not be for sale to the general public for quite a while. The publication cites un-named sources to whom it spoke as having been on a call directly with Tesla’s production manager Elon Musk. According to this loose chain of sources, the current Cybertruck won’t see volume production “...until late 2023.”

Tesla Cybertruck Delay Sources
We don’t know how to verify Elektrek’s claims that the Cybertruck is delayed since the publication's sources are not named. Tesla’s abandoned PR contact numbers and emails are no help. However, Elektrek’s owners and writers are investors in the company they report on according to the site's "About" section, so we are confident the publication carefully checks out its facts on the products its employees hold a financial stake in.

When Will Cybertruck Really Be Available?
Nobody is certain when Cybertruck product will begin. The usual way of gleaning tidbits of info from this public company, tweeting towards its leader, has not worked well. So, if the information reported is correct, Cybertruck reservation holders who have been picking out things like solar tonneau covers and camper accessories will have to wait at least until 2023 to install their gadgets. Or, if the demand is still high for all things electric by then, possibly not until 2024. Five calendar years after the product's launch event hosted by a public company.

Post-publication update October 8, 2021 - Elon Musk confirmed the timeline put forth in this story during the Q3 shareholders meeting.