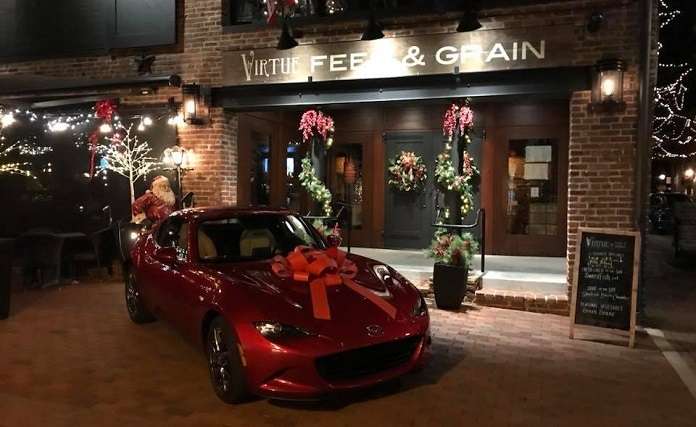 The Perfect Gift For the Season? Mazda Miata

The Mazda Miata is the ultimate gift for any auto enthusiast. What you need to know.
Advertisement

As we move through the holiday season and for much of America snow begins to fall, thoughts of drop-top driving may not be at top of mind for many. Perhaps it should? Winter is actually an ideal time to buy a convertible like a Mazda Miata. Dealers have inventory they are looking at wondering if it will gather dust until April, and they all have year-end goals to meet. Seeing a happy customer drive away in a rear-wheel drive convertible that makes room for one more crossover on the lot may be well worth a deep discount.

If you are considering gifting a Mazda Miata to a friend or loved one, we thought we would give you a quick primer on the car. Choosing a car that someone else will drive is always tricky and we advise caution. If you are looking for yourself and are not an expert on Miatas, this may also be helpful.

Miata Generations
The Miata started back in 1990. When it launched, the car was called the "NA." The NA refers to the first generation. NB and NC generations followed, and the current ND released in calendar 2015 is the one now on sale (as a 2017 model year car). We won't walk through all of the prices for the prior generations, but a new ND Miata has a range of prices from about $27K in the base model to about $32K in the highest soft-top trim. A Miata RF (more below) is priced at between About $32K and $33.5K. Expect discounts in the multiple thousands for a new Miata this time of year.

Miata Tops
Most Miatas of all generations are soft-tops. The tops are extremely high quality and durable. They do wear out if used constantly and not garaged, but replacements are available and not overly expensive. The third-generation cars were offered with what was called the Power Retractable Hard Top, or PRHT. It adds a bit of price and about 75 pounds of weight, but the hard top is more durable and very cool to watch in operation. The new 2017 Miata is offered with a retractable fastback roof and called the RF. We love the Miata RF and in our testing, it didn't lose any of its on-road magic.

Miata Transmissions
Almost all Miatas in circulation are manual stick shifts. The manual is part of the enjoyment of this particular car. Do not buy your loved one an automatic unless they absolutely cannot and will not drive a stick shift. Unlike most mainstream cars, an automatic is a detriment in this car.

Miata Trims
There have always been a variety of added sporty bits one can get included with a Miata. If the recipient of your gift will take the car to autocross events or track days, the "Club Sport" and Grand Touring trims of various generations had things like rear limited slip differentials and special shocks that make them handle and perform a bit better than the base trims. Having driven both styles of the past two generations, we can say that for on-road use there is not a lot of difference in the enjoyment.

Miata Safety
We would not recommend buying a Miata for a young person. Do what you will, but these cars have almost zero margins for error in a wreck. Starting in 2016.5 (the first NC generation model year) the Miata became available with stability and traction control (which could be turned off), side impact airbags, and rollover protection. Although a Miata is not going to do well in a crash with another vehicle, these safety enhancements do make the car much safer with regard to the possiblity of a single-car crash.

Miata Gift Overview
A used Miata can start anywhere from about $2,500 up to $20,000 depending on age, mileage, condition, and generation. Torque News recognizes that most Americans will never spend that much on a gift, but we also know that some do. We hope this overview was helpful. If you do opt to gift a person a Miata we hope you will write in below and tell us about it after they receive it!